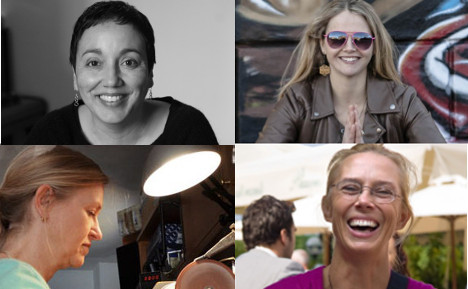 Italy, the bearer of divine wine and fabulous cuisine, and a global trailblazer in fashion, design and art.

But what it’s like to do business here, as a foreigner and as a woman?

Speaking to eight who have taken the plunge, Emma Cuthbertson, a British marketing and PR expert who lives in Lombardy, finds out whether being female and foreign is an asset or obstacle as an entrepreneur in Italy, while addressing the difficulties of going back to work after having children and the role of women in Italian society and the workplace.

What are the great things about being an entrepreneur in Italy? She is an interpretive and museum design specialist with over 10 years experience in New York at one of the most prolific interpretative design agencies in the world. Jody explains that running her business in Italy is, from a professional standpoint, an invaluable opportunity : “Italy has some of the best thinkers and artisans in the world. In the US I was always sourcing materials from Italy for my work. Now I am living here side by side these materials and the masters who craft them. That for me is priceless.”

Kathy Moulton is a Canadian lawyer who has lived in Milan for three and a half years. Having reinvented herself professionally in Italy by following her passion for yoga and health, Kathy co-owns a maternity store, manages an online community, www.kalilacommunity.com dedicated to prenatal well-being, and is currently designing a range of specialized maternity wear. “The best parts of running a business in Italy are customer loyalty, the importance of family and the resourceful nature of Italians,” she said.

“Customers become friends and come back time and time again, which is really rewarding. The big emphasis on family here means customers are generally very understanding if things have to be cancelled because your kids are sick. Italians also have a wonderful resourceful trait in that ‘no’ never really means ‘no’, it means ‘let’s find another way to do this’. I highly respect that.”

Amy West, an American, handcrafts bespoke glass and jewellery from her Murano studio in Veneto, amywestdesign.com. “There is no place like Italy, especially for a creative soul,” she said.

“My soul finds daily wonder and renewal in being here and ongoing inspiration and restitution make up and contribute in innumerable means to a great life in Italy. I am in a special situation being located near Venice, living in her canals and on her Laguna.”

Linda Martinez, based in Rome, owns and runs The Beehive, a cross between a budget hotel and an upscale hostel. Linda with her husband, Steve, owners of The Beehive in Rome.

“The great thing about doing business in Italy is that people truly are open to new ideas and are excited about working together,” Linda said.

“There are so many creative and entrepreneurial people here. The big problem is that balloons get popped when the reality of actually doing the business rudely interrupts the big picture.” “The lake setting itself allows me to offer a very high-end solution which is a major selling point for my business,” she said.

“Italy is renowned for fantastic food and wine so that also makes weddings here even more compelling for my couples. On the personal side the quality of life here is good for raising a family. Lake Garda is also a mesmerizingly beautiful and tranquil location. The stunning views and walks can truly calm your soul and warm your heart; these make for great stress busters too… which are important in wedding planning!”

Being female and foreign. An obstacle or an asset?

From Ginny’s experience there have definitely been swings and roundabouts to being a female and foreign whilst running her wedding planning business in Italy.

“Being tall and blonde has definitely opened some doors for me, whilst on other occasions I have turned up to meet a supplier and just by the look on their faces I can see doors and minds mentally closing. I often concluded that they were assuming I was a bored housewife looking for a hobby to tinker with.”

Christina Ayer is an online entrepreneur, managing two businesses in Italy: xinamarie.com is a niche-market online store that supplies mosaic art materials and holiday-garda.com specializes in the rental of luxury villas on Lake Garda. “Women are not very common in business echelons. It depends on who you have on the other side of the table,” she said.

“At the higher levels, they take me for what I am and I have never experienced disrespect for being a woman. At the lower levels, there is a pre-conception that I am probably not that important. Once they get to know me and what I have to say, they tend to pass me swiftly onto a higher level in their business hierarchy!” “Being a native English speaker definitely allows me to differentiate myself from my competitors. My guests come from all over the world and most speak English. I find that they almost breathe a sigh of relief when they realize I can speak their language and understand their needs.”

Julianna Northcott, originally from Cornwall in the UK, was the managing director of one of the largest campsites on the south side of Lake Garda for over ten years. “I suppose I was quite unusual at the time in 1990s Italy, holding a relatively high-level position as a female, foreign newcomer,” she said.

“Most of the campsites are family businesses so I was an outsider on three levels. It was tough at times. I distinctly remember attending meetings with local authorities and tourist boards whilst representing the campsite. My voice and feedback were largely ignored on some such occasions. Male counterparts would actually avoid eye contact or use certain body language to ensure that I was not part of the dialogue at the meeting.”

Kathy believes that in 2016 that same attitude is still prevalent in Italy: “It’s not always openly evident but it’s there and underlying that, suppliers or business partners would prefer to speak to my husband rather than to me. Or they just automatically assume that he’s the business owner. Women are expected to be always attractive and are usually sexualized, even if they hold positions of power.”

The Italian media has certainly raised eyebrows in the international arena over the years for its overt sexualization of women, especially on television.

Silvio Berlusconi, the Peter Pan playboy of Italian politics and media mogul was infamous for his showgirl TV shows and sexist gaffs whilst in power. However, the “Bunga Bunga” sex scandal ended his premiership in 2011 and was also the final straw for Italian women, with hundreds of thousands taking to the streets in protest about the portrayal of women in Italian media and their treatment in society.

Mario Monti made “dignity for women” one of his key messages during his time as technocrat premier. “We should be able to unleash all the potential of women in society, and this isn't only a social duty, it is also essential for economic growth,” he said on the first day of the Berlusconi sex trial.

The winds of change are continuing to muster in Italy at top levels though. Premier Matteo Renzi made history when he took the reins of government in 2014 with over half of his cabinet made up of women for the first time ever.

Interesting too, is the current race for the mayor of Rome which is being predominately contended by two women. Virginia Raggi, a 37 year old lawyer from the anti-establishment Five Star Movement (M5S), is leading polls to become mayor of the capital, closely followed by far-right minister Giorgia Meloni. The idea of two women running for mayor of Rome would be have inconceivable a few years ago.

Elena Kloppenburg, from Germany, is a professional portrait photographer based out of Milan www.elenakphotography.com. Elena explains her take on the question of obstacle versus asset: “Italians sometimes assume that because I am a woman, I am doing photography as an unpaid hobby. On the whole though I don’t think that being a woman penalizes me. On the contrary, in my line of work, family portraiture, it is a strength as I believe it allows me to emphasize with fellow mothers. Empathy is key in taking compelling photographs.”

MaryLynn Castriciano has built up her dental practice www.studiodentisticocastriciano.it in Desenzano, Lombardy, over the past nine years. She has found that preconceived ideas still dominate in the medical profession in Italy. “The perception is that a male doctor or dentist will do a better job and that female dentists treat children or should be limited to operative or endodontic work. Having said that, I believe kindness and determination have prevailed in my case and the fact that I hold an American degree is definitely a positive here.”

Jody added: “In my field as a design architect I have always been in a male-dominated field and I have found every situation to be unique. I can compare Italy to Saudi Arabia, to Singapore, to India to Illinois. The field of museums and interpretive design is in perhaps a special bubble of professionalism since it takes so many different types of professionals to bring the project all together.”

Mummy is just off to work now. Or is she?

Ginny initially began wedding planning eight years ago as a new venture after her two children were born and her previous employer wouldn’t allow her to go back to work part-time. As Ginny’s children have grown, so has her business and she currently manages on average 20 weddings during the summer months.

Going back to work once you have had children can be a complicated affair anywhere in the world. Doing that abroad where you are already out of your cultural, social and linguistic comfort zones makes it increasingly challengingly and stressful. Part-time work is especially difficult to find in Italy for back-to-work mums, as:

• Employers are generally not incentivized by the authorities to offer this as an option.
• School hours vary across the education system and geographical areas. Typically a school day in the state system finishes at lunchtime on at least three, if not five days, of the week.
• That complexity is increased with the 90-day school summer holidays: June until September.
• After-school care facilities are still not always widely available, especially in rural areas.
• Greater movement of families away from home areas and a population that is having children later in life mean that family support networks are less and less common.

On the flipside, however, the difficulty of finding part-time work does create positive opportunities and prompts women to follow their dreams to set-up their own businesses and brands, as in the case of Ginny and Kathy.

However, it is important to point out that overall in Italy women are still very much an under-utilised resource in the workforce: “Italy is a country in which women are still very connected to a traditional vision of their role. Care work is work principally done by women. So we find ourselves in a situation where women aren't getting work,” said Maddalena Vianello, a leading feminist activist.

“If they get it, statistics show that they are more precarious, worse paid and in professional positions which, let's say, are inferior in relation to their level of education.”

A 2015 study by Eurostat placed Italy amongst the three worst countries in Europe when it comes to the work gender gap with just over 50.6 percent of women in employment versus 70.6 percent of men.

Emma Cuthbertson, originally from Cornwall in the UK, runs La Piccola Agency, a boutique Marketing and PR agency in Lombardy. Emma's background is marketing communications and PR in the IT sector. She has lived and worked in Barcelona, London and Milan.