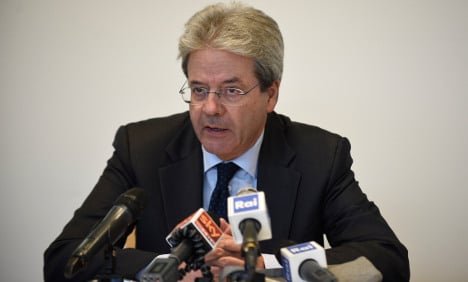 Ministers from more than 40 African states attending talks in Rome on Wednesday voiced strong backing for one of the central elements of the Italian plan – the stabilization of Libya. But long-standing concerns about the creation of a “fortress Europe” were also aired.

Italy is on the frontline of a wave of migrant arrivals from north Africa, with more than 350,000 people having reached its shores since the start of 2014, spurring efforts to find a long-term solution.

Italian Foreign Minister Paolo Gentiloni said Rome's “migration compact” proposals had been given a “very favourable” reception at the first of what is to become a regular, bi-annual Italy-Africa summit.

Senegal's Foreign Minister Mankeur N'Diaye however warned that the EU could not simply slam the door shut without doing huge damage to economies dependent on the remittances of migrant workers.

“We have many young people who head to Libya, from Niger, and are ready to try their chance on people smugglers' boats,” N'Diaye told AFP.

“We have to fight illegal immigration but we also have to create new avenues for regular, legal migration. The support that migrants bring to our development is extraordinary.”

“The situation in Libya deserves to have our full attention. This country is on its way to becoming a haven for terrorism,” Foreign Minister Moussa Faki Mahamat said.

The minister praised the “courageous decisions” taken earlier this week in Vienna, where a 25-nation coalition assembled by the US and Italy agreed to exempt the Government of National Accord from a UN arms embargo on Libya to enable it to combat Islamic State militants.

The embargo was imposed to stem fighting in a country that has been rife with conflict since the 2011 uprising which led to the overthrow and killing of Moamer Kadhafi.

Gentiloni said Rome wanted its migration plan approved at a summit of European Union leaders in Brussels next month and the first pilot projects launched “without delay”.

Under the plan the EU would offer African countries substantially increased aid and investment in return for them improving border controls to make it harder for migrants to reach the southern shores of the Mediterranean, and to accept the repatriation of those who make it to Europe but are judged to have no right to stay.

The pact also envisages an increase in legal migration opportunities for Africans wanting to start new lives in Europe and incentives for African states to establish their own reception centres and absorption procedures for asylum seekers from elsewhere in the region.

At a summit last year in the Maltese capital Valletta, EU leaders agreed with their African counterparts to set up a €1.8 billion trust fund to help finance some of these objectives.

But the amount was attacked by aid agencies and African governments as a drop in the ocean when set against what needs to be done to address the root causes of migration from Africa.

Italy agrees with that view, Gentiloni's deputy, Mario Giro, told AFP. “The Valletta money was far too little. We have to talk about big investment and in exchange for that, we (the EU and Africa) work together to manage migration flows and the security aspect.”

Germany has made it clear however that it will not go along with one of the elements of Italy's plan: the issuing of EU-Africa bonds to finance it.

Proposals to increase legal migration from Africa are also likely to encounter opposition within the EU.

Gentiloni said two million Africans had arrived in Europe between 2010 and 2015 and the vast majority of people landing at Italy's southern ports this year have been from sub-Saharan Africa.

“Italy has chosen to bet on the future of Africa through long-term investment in sustainable development, security and peace and in managing migrant flows,” he said.