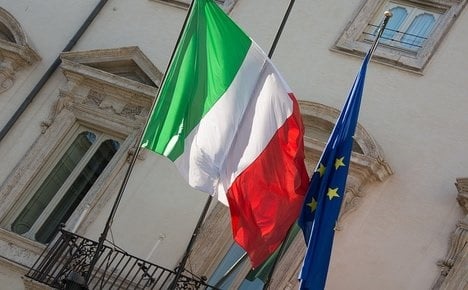 At least, that's according to figures released earlier this month by UK pollsters Ipsos Mori.

But the latest figures bear a stark contrast to the results of a similar poll carried out in 2010, when 73 percent of those surveyed said they were in favour of the union.

So what's changed in six years? Are Italians really falling out of love with the idea of a united Europe?

It would seem so.

In spite of the poll's small sample size (between 500 and 1000 Italians participated) its findings are no anomaly.

A March study by Italian research group, Demo, suggested a third of all Italians wanted to leave the bloc, while over the last five years half of all Italian political parties have run anti-EU campaigns.

Current opinion polls show that the combined support for the main euro-sceptic Italian parties: the Five Star Movement (M5S) , the Northern League and Brothers of Italy adds up to around 47 percent, Raffele Marchetti, a professor of international relations at Rome's Luiss University, said.

“So the Ipsos poll could be very accurate,” he told The Local.

By far the key factor driving Italian antagonism towards the EU is the economy.

“We have seen the same trend across all member states since the financial crisis began in 2008,” Marchetti added.

During times of boom and prosperity, the EU is viewed as a positive force, which boosts trade and creates economic stability. In times of crisis, however, it is blamed for all manner of ills: from creating too much competition for jobs to costing taxpayers too much money.

“With Italy struggling to recover from what has now become a triple-dip recession, these sentiments have found a fertile breeding ground,” Marchetti explained.

The EU has become a soft target for politicians looking to lay the blame for the county's hamstrung economy at someone else's door.

It's an easy game to play: Italy is a net loser among the 28 countries of the union, contributing some €4.3 billion more than it gets back in funding from Brussels.

“Anti-Europe rhetoric has grown in intensity from certain quarters of Italian politics, especially from Matteo Salvini [the leader of the far-right Northern League], and Georgia Meloni [the co-founder of Brothers of Italy],” said Feretti.

The Five Star Movement – which exploded onto the Italian political scene in 2008, fronted by stand-up comic Beppe Grillo – have also been strong critics of European fiscal policy although their position on the EU is unclear.

M5S is now the second most popular party in Italy and has promised to take the country out of the single currency if it ever forms a government.

The promise has proved popular among Italians who still view the days of the Lira (which was replaced by the Euro in 2002) with great affection.

“Everybody in Italy will tell you the same thing,” laughed Claudia, a 44-year-old bar owner from Rome. “When the Euro came in, prices doubled overnight and have never recovered.”

“In terms of spending power, things have never been the same since,” she added, taking down a 10,000 Lire note from the notice board behind the bar and waving it in the air.

“Nowadays, it's much more difficult for people who are earning low salaries to get by.”

Economy aside, there are other factors driving the palpable anti-European sentiment in Italy.

With such high numbers, the Italian government has repeatedly called on the EU to develop a common solution to the problem.

Yet in spite of numerous summits and conferences, an EU-wide strategy to deal with the issue is yet to materialize.

As the crisis rumbles on, France, Belgium, Austria, Denmark and Germany have all chosen to suspend open-boarders agreements in a bid to stop the flow of arrivals.

In the meantime the EU has failed to agree on plans to repatriate tens of thousands of refugees from Italy while threatening the country with sanctions for not doing enough to stop asylum seekers from leaving for northern Europe.

“The EU's inability to propose a coordinated response to the crisis involving a common solution for all countries has caused many Italians to lose faith in it as an institution,” explained Marchetti.

Between rigid economic policies and lack of leadership during the migrant crisis a rift has opened up between Italy and the rest of Europe.

Last year, Italy's Democratic Party Prime Minister, Matteo Renzi, usually a staunch Europhile, laid into the EU on several occasions, calling the institution out on what he felt were double standards.

“If that's your idea of Europe you can keep it,” he told reporters last year after another failed attempt to get other European countries to share the migrant burden.

“Either give us solidarity or don't waste our time.”


Even Italy's pro-Europe leader Matteo Renzi has criticized the EU as an institution. Photo: Alberto Pizzoli/AFP

High-profile clashes between Renzi, German Chancellor Angela Merkel and European Council president Donald Tusk have further added to the feeling that anti-Brussels sentiment is no longer confined to the political fringes.

In addition, the column inches dedicated to the UK referendum on the EU on June 23rd has taken euro-scepticism into the mainstream, providing Italians with the opportunity to reflect on their own status within the EU.

'Is the union democratic enough?', 'what do we gain from it?', and 'should we have a referendum too?' are all questions which are now in some way tangible – and not merely the realm of political theory.

“The Italians in particular hope to have their own opportunity to go to the polls on their EU membership, which lends a sense that even if the British vote sticks with the status quo in June, it will not be the end of the EU’s challenges,” said Ipsos Mori managing director, Bobby Duffy.

So could we see an 'Italexit' any time soon?

“It's easy to speculate based on this or that, but the strongest indicator we have is to look at how Italians have voted historically,” added Marchetti.

During the last European elections in which a number of anti-European parties made ground –  from Nigel Farage's UKIP in the UK to Marine Le Pen's National front in France – Italy's pro-European Democratic Party got 40.3 percent of the vote, making it the second largest national party within the European Parliament.

At Italy's last general election, the Democratic Party also took home the lion's share of the vote (29.5 percent) in spite of a tidal wave of support for M5S, which currently finds itself embroiled in a high-profile corruption scandal.

“The majority of Italians have always voted in for Europe and even if we consider a 'worst case' scenario – most Italians are still in favour of the EU,” Marchetti said.