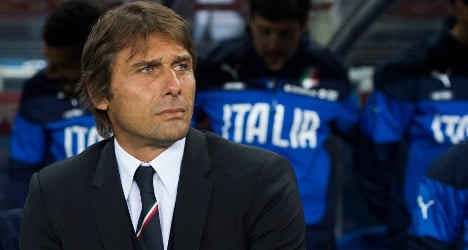 Italy will head to the June 10th-July 10th tournament in France looking to reach a second successive final but facing a formidable challenge after failing to get past the first round at the past two editions of the World Cup.

New York City FC midfielder Andrea Pirlo and AC Milan's on-loan Liverpool striker Mario Balotelli were among the big names missing when Conte named his preliminary squad last week for a first training camp following the conclusion of Serie A and many other leagues around Europe. It now looks certain that neither player will feature at Euro 2016, where Italy will also be without key midfielder Marco Verratti (Paris Saint-Germain) and Claudio Marchisio (Juventus) through injury.

Conte's squad last week also did not include players from Juventus, AC Milan and other teams who were involved in Cup finals last weekend and they have all returned to the fray.

It meant defenders Armando Izzo (Genoa) and Lorenzo Tonelli (Empoli) were cut, the second piece of bad new for Izzo on Monday after he was questioned by police in relation to his alleged role in a match-fixing affair dating from his spell at Serie B side Avellino in 2014.

A statement from the Italian football federation said Conte, who will take over at Premier League giants Chelsea after the summer, will name his final 23-man squad for Euro 2016 on May 31st.

Italy host Scotland in a pre-tournament friendly in Malta on Sunday, and then host Finland on June 6th in Verona.