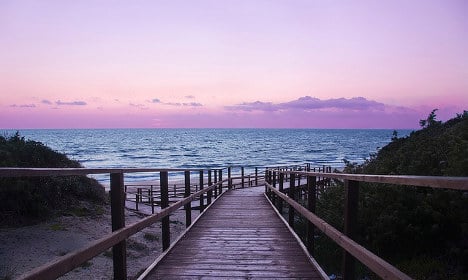 So once you’re done with the sites or are looking for somewhere to cool off or watch the sunset, then check out some of our suggestions below. What's more, you don't need a car to reach them. Having visited all the others on the list, Santa Severa makes it to the number-one spot for several reasons.

Firstly, if you don’t have a car, then it is by far the easiest beach to reach by train from Rome. All you need to do is catch a train towards Civitavecchia (there is one an hour from Rome’s Termini station, but you can also jump on at Ostiense, Trastevere or San Pietro) and get off at Santa Severa. The journey takes about an hour and a return ticket is about €8.

From the station, the beautiful stretch of coastline is just a 10 minute walk through fields and wildflowers. At the start of the beach lies the 11th-century Castello Santa Severa, so you can combine history with sunbathing. The other advantage is that Santa Severa has plenty of 'free beach' (spiaggia libera) areas, but if you want to hire a lounger and umbrella for the day at a 'stabilimento' (private establishment), then it’s not too expensive (expect to pay between €12 and €18 for the day). There are also a handful of beach-side bars and restaurants.

Overall, it feels less crowded than some of the other beach spots. A little bit further afield, towards Naples, is Gaeta, home to the Blue Flag Ariana Beach, thanks to its clear waters.

Gaeta also offers a medieval town to explore and several other beaches including Serapo, which is close to the city centre, and Fontania, a small beach located north-west of Serapo, which is reachable by foot or by swimming. The area is also home to two grottoes, Pozzo del Diavolo and Pozzo della Chiavi.

To get there, catch a regional train from Rome’s Termini station towards Naples, getting off at Formia-Gaeta. The journey takes just over an hour and tickets are around €16 return. One stop before Formia-Gaeta is Sperlonga, where actress Brigitte Bardot flocked to back in the day. The stretch of coastline is picturesque, especially with the quaint old town perched at the start, but it is full of private establishments with only a small patch of free beach. It also gets packed during the summer months.

But other than sunbathing, you can explore the museum in the grounds of an old Roman villa owned by Emperor Tiberius, and check out the remains of the grotto where he entertained guests. The town itself has narrow streets with white houses, and plenty of restaurants serving fresh fish.

The station Fondi-Sperlonga lies midway along the Rome-Naples railway line, so get off there and take the bus down to the seafront. Train tickets are around €16 return, and expect to pay €1-2 for the bus. Both Anzio, which played a role in the Second World War beach landings, and Nettuno, lie next door to each other and can easily be reached from Rome. Another Blue Flag area, both offer a mix of private and free beach.

There’s a train an hour from Termini station, stopping first at Anzio and then at Nettuno, with the journey costing about €8 return and taking just over an hour. If you’re looking for some peace and quiet, then the pristine Sabaudia is probably the most secluded beach near Rome. But no doubt that's because it’s slightly harder to get to – either way, it will be worth it.

Take a Cotral bus from Rome’s Laurentina metro station on Line B to Sabaudia’s Piazza Oberdan, and from there jump on a shuttle bus which runs along the coastline. You can also catch a train from Termini to Piverno-Fossanova, which takes about an hour, and then take a Cotral bus to Saubaudia, a journey of about 20 minutes. One stop down from Santa Severa along the Rome-Civitavecchia line, and a shorter walk from the train station, is charming Santa Marinella. There’s a long stretch of sand, including some free beach, and restaurants along the promenade.

It's a pretty beach but gets very crowded in July and August. Both Santa Marinella and Santa Severa are popular with wind-surfers and standup paddle boarders. Train tickets are around €8-9 return. The waterfront in Civitavecchia. Photo: DepositPhotos

Civitavecchia, a major cruise and ferry port, is often overlooked when it comes to its beaches, as people tend to head to Santa Severa or Santa Marinella.

Just over the road from the train station is a stretch of pebble beach, with a promenade of bars and restaurants. It might not be as scenic as the other two, but it feels a lot less crowded, despite being next to a port. Within the area you can also find almost two kilometres of sandy beach at Sant’Agostino, which is about 10 kilometres down the coastal road from Civitavecchia, going towards Tarquinia. The beach is also free of 'stabilimenti', meaning you can lay your beach towel down wherever you want.

Just behind Sant’Agostino lies La Frasca, a reef coastline that stretches for 6km, making it an ideal spot for scuba diving. The downside for both of these is you'll need a car (or perhaps get a taxi from Civitavecchia).

Or… if you walk south from the port, along the promenade, you'll reach an area called Pirgo, which has a small beach and some beach-side bars. Bliss.