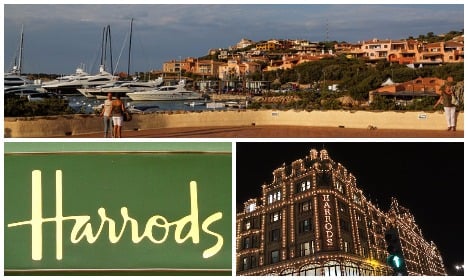 Harrods has been told it cannot open in Sardinia this year. Photo: Rick Payette/Tony Sheng/Hl_1001/Flickr

For the past three summers, Harrods Village, a prefabricated luxury supermarket catering to the yacht-owning elite who flock to Porto Cervo, along Sardinia's Costa Smeralda, has graced the town's waterfront.

But this year, they'll have to find somewhere else to buy their designer clothes, jewellery and accessories for their yachts or supercars after authorities said the store would not be allowed to open this summer.

An eviction notice was served just as Harrods began preparing for the summer season.

Officials say the luxury store is breaking building rules that apply in the municipality of Arzachena, to which Porto Cervo belongs.

“Only temporary ventures can be established on the docks,” officials told La Stampa, explaining that long-term enterprises need to obtain building permits – a lengthy and expensive undertaking in bureaucratic Italy.

“The store has been here for the last three summers already and if it stays another year it can no longer be considered a 'temporary' undertaking,” officials added.

Harrods is reportedly considering appealing the decision in an administrative court in a bid to return to the waterfront this summer – and the modern town's 421 inhabitants are hoping they will be successful.

When contacted by The Local a Harrods spokesperson was not immediately available for comment.

“The store really raised the profile of Porto Cervo,” a local bar owner told La Stampa. “Luxury yacht-owners used to line up to try and get a mooring spot in front of its windows.

“I don't know why every attempt at boosting the town's image end up being blocked.”

Porto Cervo's Mayor, Alberto Ragnedda, said it was a shame that the village would probably not open this year but said he respected the municipality's decision.

“Certainly, the Costa Smeralda cannot be a free for all,” he said.

“Everybody, including Harrods, needs to obey the same rules.”

Harrods village opened in Sardinia in 2013 after the Emir of Qatar bought the department store for an estimated €1.8 billion from British magnate Mohammed Al-Fayed in 2010.

Unless the company successfully appeals the decision, the next Harrods Village will open in Doha, Quatar, this winter.