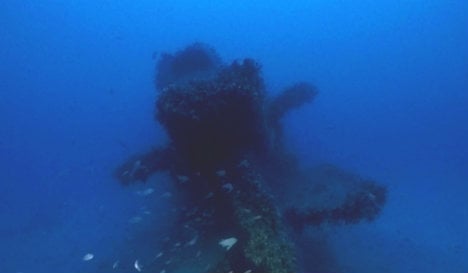 The vessel was found at a depth of 100 metres, not far from the island of Tavolara, off the northeast coast of Sardinia.

SEE MORE: Crew who sunk with WWII sub 'wanted to be found': relative

Bondone knew he had located the vanished vessel when the shadow of its 84-metre-long, eight-metre-wide wreck came into view once he reached a depth of 80 metres.

“Immediately I thought of the destiny of the men who met their deaths down there,” he told La Nuova Sardegna.

“It was a fate shared by so many men, submariners in particular, fighting on all both sides of the conflict,” Bordone added.

The HMS P 311 left Malta on December 28th 1942, on a mission to destroy the Italian battleships Trieste and Gorizia as they lay at anchor in the port of La Maddalena, located on an island of the same name off the northern coast of Sardinia.

But the sub vanished without a trace after sending a final signal on December 31st, 1942. She was reported overdue on January 8th when she failed to return to base and later presumed sunk.

It is thought the ship went down after striking a mine in the gulf of Olbia on or around January 2nd, 1943.

The wreck is in excellent condition, with only its prow showing damage from the explosion. In all likelihood, experts say the vessel's inner chamber was not flooded as it sank

“It looks like she probably went down with air sealed inside, meaning then crew eventually died of oxygen deprivation,” Bondone said.

“It's important to have the utmost respect for wrecks in cases like this.”

The Royal Navy told The Local that the HMS P 311 would almost certainly not be moved from its final resting place, irrespective of whether or not bodies are sealed inside.

“Wrecks are only raised if there are extremely compelling historical or operational reasons to do so,” a navy spokesperson told The Local.

“Once a military vessel sinks it becomes a war grave and is left where it lies.”