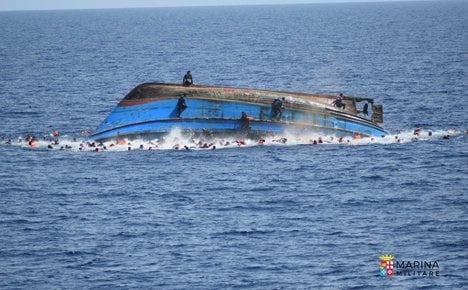 The survivors of the first shipwreck, which happened on Wednesday, said some 650 people were aboard their boat when it left chaos-wracked Libya.

But they “spoke of 100 missing people who were stuck in the hull,” a spokesman for the International Organization of Migration in Italy, Flavio Di Giacomo, told AFP. Italian authorities had initially given a toll of five confirmed dead.

While the Italian navy was able to rescue some 560 people from the water on Wednesday, the shipwreck may be one of the worst tragedies in the Mediterranean in recent months.

The navy captured the tragedy in the horrifying video below that shows the boat roll over and dump its passengers into the water. Seconds later the sea begins to churn as the migrants swim for their lives.

Several rescuers from the Italian navy jumped into the water in an effort to help, some grabbing people by the hair in order to pull them to safety.

Separately, the EU's naval force announced that up to 30 migrants were believed to have died after another ship flipped over on Thursday, drawing rescuers to the scene who threw life jackets and floats to those in the water.

Another migrant boat sinking on Tuesday left a baby girl orphaned after both her parents died, prompting dozens of Italian families to offer to adopt her.

The single deadliest migrant boat sinking remains one from April 2015 when some 700 people died.

Amid the catastrophes at sea, police in Greece were finishing the evacuation of the squalid Idomeni refugee camp on the border with Macedonia that had become a symbol of human suffering and chaos as Europe struggles with its worst migrant crisis since the Second World War.

In the space of three days, police transferred about 4,000 migrants by bus from Idomeni to newly created camps in the industrial outskirts of Greece's second city Thessaloniki.

As the footage of Wednesday's capsize went around the world, photographs posted on social media showed migrants from Thursday's shipwreck waving their arms for help as they balance perilously on the deck of the boat, already underwater but still clearly visible.

“A Luxembourg reconnaissance plane spotted a capsized boat around 35 nautical miles off the Libyan coast with about 100 migrants in the water or clinging to the sinking vessel,” Antonello de Renzis Sonnino, spokesman for the EU's military operation to combat people smugglers in the Mediterranean, told AFP.

A bout of good weather as summer arrives has kicked off a fresh stream of boats attempting to cross from Libya to Italy.

The survivors will be added to the list of nearly 40,000 migrants to arrive in the country's southern ports so far this year.

Back in Greece meanwhile, authorities who cleared out the camp at Idomeni admitted they may not have solved the problem of what will become of its former residents.

Most of the 8,400 people at the camp when the police operation began on Tuesday refused to cooperate, police said.

“Most of them have gone outside gas stations and hotels nearby, or have walked to camps on their own,” the officer said.

At its height, the camp housed more than 12,000 people, who spent a brutal winter in freezing rain and mud after Macedonia and other Balkan states closed their borders in mid-February to stem the influx to northern Europe.

Many tried to force their way across the border, sometimes resulting in violent encounters with Macedonian police.

Aid agencies initially welcomed the operation to clear Idomeni after complaints from local authorities over petty crime and the fear of infectious diseases.

But on Wednesday, the Save the Children charity was already reporting major problems at the new sites.

“When families arrived in the new camps yesterday, many with babies and young children, they were faced with deplorable conditions,” the group's mission leader Amy Frost said in a statement, describing conditions as “inhumane”.