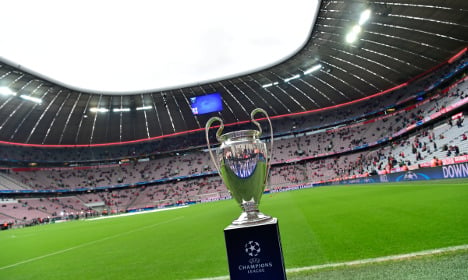 It is the fourth time the final of Europe’s premier club event will to be held at the San Siro. Photo: AFP

Record ten-time champions Real, who won the inaugural trophy in 1956, are gunning for their 11th title from European football’s premier club event two years after a stunning comeback victory over Atletico in Lisbon secured ‘La Decima’.

Cristiano Ronaldo has given Real fans a huge boost with the news he is 100% fit following a training ground scare on Tuesday and coach Zinedine Zidane is counting on the Portuguese superstar to rise to the occasion.

Zidane, who won the trophy as a player with Real in 2002, is seeking to emulate Italian Carlo Ancelotti in steering Real to victory, in what is the Frenchman’s first season in charge at the Santiago Bernabeu stadium.

“We’ve had two weeks to prepare and now what the players want is for the ball to start rolling,” said ZIdane.

It is the fourth time the final of Europe’s premier club event will to be held at the San Siro, and the first since Bayern Munich beat Valencia in 2001.

Even before kick-off, a slice of Champions League history will be made.

R&B star Alicia Keys will become the first artist to perform live at the final during a glitzy, nine-minute opening ceremony that will feature 400 dancers and be capped by Italian tenor Andrea Bocelli singing the competition’s anthem.

Atletico, however, are the ones hoping to be singing and dancing in the streets of Milan later Saturday as the ‘Rojiblancos’ go in search of a maiden trophy.

Coached by former Argentina international Diego Simeone, Atletico have won the Europa League — European football’s second-tier competition — twice in recent years (2010, 2012) and threatened the decades-long dominance of Real and Barcelona in ‘La Liga’, which they won in 2014 to add to a Spanish Cup victory in 2013.

Two years after Real’s shock comeback win in Lisbon, Simeone is ready to end a 113-year wait to be crowned kings of Europe.

“I like to have 113 years of history on my back. I love the pressure,” said Simeone, who will be hoping seven-goal striker Antoine Griezmann or Fernando Torres continue their fine form in the competition.

Torres — a Champions League winner with Chelsea in 2012 — said he’s ready to give it everything.

“There’s no doubt, it’s the most important game I am ever going to play,” said Torres, who returned to his childhood club in 2014 following an ill-fated spell in Serie A with AC Milan.

“With Chelsea and the Spanish national team I’ve won a lot of titles, but this is really special for me. To me it means everything. It’s the game of my life.”