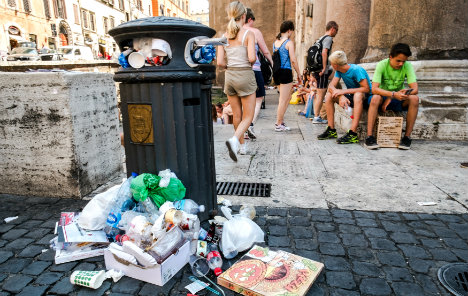 An overflowing bin in front of the Pantheon, Rome. Photo: Andreas Solaro/AFP

Unions called the 24-hour strike over longstanding contractual issues and the action's timing is set to cause maximum discomfort to citizens and tourists in Rome, coming as tourist numbers reach their annual peak amid a period of hot weather, Corriere reported.

Despite the strike only lasting a day, many fear it will be enough to cause the Eternal City's well-documented waste disposal issues to spiral out of control.

Monday is a key day for Rome's waste collection authorities as on Sundays services are run at a reduced rate. Making matters worse, only limited collections will operate this Thursday, thanks to Italy's Republic Day holiday.

“Inevitably we can see sacks of rubbish mounting in the streets,” said Natale Di Cola, president of the union, Cgil, which coordinated the strike.

“But this just goes to show the importance of giving our waste collectors contracts which respect their rights.”

As bins began to overflow, Ama president, Daniele Fortini, appealed to citizens to do their bit to keep waste problems in check.

“Keep your rubbish at home, recycle what you can and don't leave anything on the pavement,” he implored, in a bid to prevent stinking heaps of litter from mounting the streets.

Waste disposal problems are a long-standing bugbear for Eternal City residents. Even without strikes rubbish and litter quickly pile up – embarrassingly, often in front of some of Rome's most iconic landmarks.

Despite the problems, Rome's citizens pay a whopping €250 each year to keep the streets clean – a figure some 50 percent higher than the national average.

According to surveys, less than 10 percent of all residents are happy with the city's waste disposal services and the issue has become a key battleground in the upcoming mayoral elections, which will be contested next Sunday.

The centre-right candidate ,Giorgia Meloni, from the Brothers of Italy party, has promised to raise levels of recycling to 75 percent if elected, while Democratic Party candidate Roberto Giachetti is vowing to tackle the problem by creating new recycling centers in the city.

Virginia Raggi, candidate for the anti-establishment Five Star Movement, has said she will provide all new mothers in the city with washable, reusable nappies in the hope of eliminating some of the city's waste.