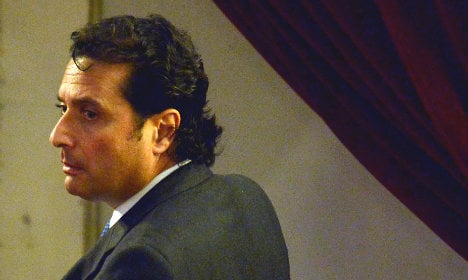 Francesco Schettino during his first instance trial last year. Photo: Alberto Pizzoli/AFP
Schettino, who is yet to serve any of his sentence, is asking to be acquitted, with his defence lawyers arguing the disaster was the collective responsibility of the ship's crew.

During the appeal, Schettino's legal team have highlighted in particular the role of the ship's Indonesian helmsman, Jacob Rusli Bin, in causing what was Italy's biggest maritime disaster during peacetime.

The Concordia went down after hitting rocks off the Tuscan island of Giglio island in January 2012.

Since then, the captain has always maintained his innocence and claims to have been made a scapegoat for the accident. Last year, he published a controversial book entitled 'The Sunken Truths' which contained his version of events.

As Schettino protests his innocence prosecutors are calling for the appeal judges to hand him a more severe sentence of 27 years.

During an earlier hearing prosecutor Alessandro Leopizzi told judges Schettino had a “titanic responsibility” for what happened.

“The shipwreck was also caused by others but that does not excuse the captain's responsibility,” Ansa reported Leopizzi as saying.

Leopizzi added that Schettino's behaviour in the run up to and aftermath of the incident warrants “exemplary punishment”.

During the first trial, Schettino was dubbed 'Captain Coward' by the Italian media after it emerged he had abandoned the ship while there were still passengers on board, although Schettino claims he left the ship accidentally after “falling into” a lifeboat.

Schettino was also accused of deliberately sailing the boat too close to the rocks in a bid to impress a nightclub dancer who had accompanied him to the bridge of the doomed cruise liner.

It is not thought that the former skipper will attend the verdict hearing in Florence but will instead spend the day with his family at home in Meta di Sorrento, near Naples.

Schettino has attended none of the eleven hearings during the appeal, which he claims is due to his desire to maintain a low profile.

The Concordia disaster led to the largest maritime salvage operation ever last May, during which the wreck of the ship was re-floated and towed to the port of Genoa to be scrapped.