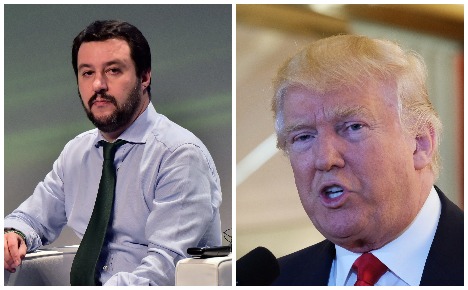 The pair have met. There is even picture evidence of them together, smiling and giving the thumbs-up on the sidelines of an election rally in Pennsylvania on April 25th.

Salvini soon tweeted the snap, telling his followers that, unlike the Italian Prime Minister Matteo Renzi, he would choose the “legality and security” proposed by Trump in his presidential campaign over the “disastrous” policies of Obama and Merkel.

The meeting lasted 20 minutes, it was reported at the time, with Trump allegedly telling Salvini: “I hope you become prime minister of Italy soon”.

But in an interview with The Hollywood Reporter, published on Wednesday, Trump, who last week clinched the number of delegates needed to win the Republican party nomination for US president, declared: “I didn’t want to meet him. I didn’t even know him”.

The snub has left people wondering why Trump, who shares the same policy ideas as Salvini, would reject him so harshly.

One of the theories is that Trump didn’t realize who Salvini was when he was doorstopped for a photo in Pennsylvania, La Repubblica said.

But the more plausible one is that Trump is trying to distance himself from Europe’s rapidly rising anti-immigrant far-right parties, despite their unabashed support.

Salvini denies the meeting was improvised, telling La Repubblica: “This makes me laugh…that interview is unbelievable. I assure you, a dozen emails were exchanged in preparation for that meeting. I didn’t jump from an aeroplane with a hat and flag.”

But despite getting the cold shoulder, Salvini remains a staunch Trump fan, tweeting on Wednesday morning: “I hope Trump becomes president of the USA”.