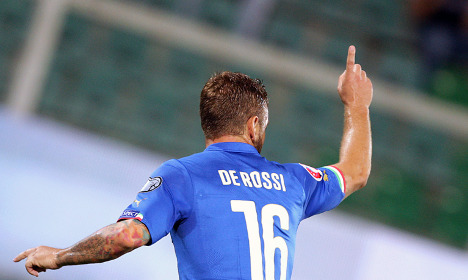 Daniele De Rossi has made the Italy squad for Euro 2016. Photo: Marcello Paternostro/AFP

With midfield stalwarts Claudio Marchisio and Marco Verratti both injured, Conte had feared for the fitness of Paris Saint-Germain's Motta and Roma's De Rossi, both struggling with a calf and thigh injuries respectively.

“The choices are made, we reflected a great deal and picked the best at our disposal,” said Conte as the announcement was made live on television.

The pair have been given the all clear for the tournament which gets underway in France on June 10th, but AC Milan midfielder Ricardo Montolivo has failed to recover from his calf problem and will miss out again, as at the 2014 World Cup in Brazil, because of a fractured foot.

Italy host Finland in a pre-tournament friendly on June 6th in Verona. Italy take on Belgium on June 13th, Sweden on June 17th and the Republic of Ireland on June 22nd in Group E at the tournament in France.