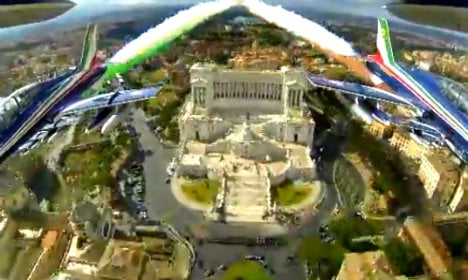 Racing their Italian-made Atermacchi-MB399s low over the Eternal City, Italy's top guns took less than a minute to drape a smoky tricolour flag over the city.

Seen from the ground, it was quite the spectacle, but what about from the air?

The video below, uploaded to La Repubblica, was recorded aboard one of the planes and gives a jet's-eye view of the flyover.

Footage shows the jets crossing around five kilometres of the city in just 30 seconds, while cruising at speeds of 600 kmph.

The video offers keen-eyed viewers a fleeting view of some of Rome's most iconic landmarks from above – but blink and you'll miss them!

The planes pass over the historic Circus Maximus, the Roman forum and the Altare della Patria monument before proceeding above the city's main thoroughfare, Via del Corso up to Piazza del Popolo.