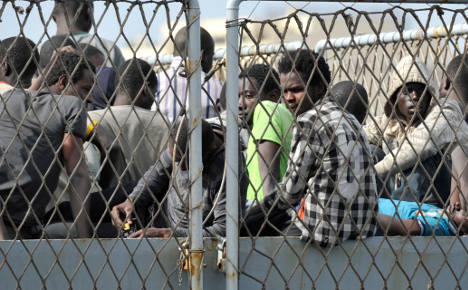 Over 46,700 migrants have arrived in Italy since the start of this year. Photo: Giovanni Isolino/AFP

In the last week of May alone, there were nine shipwrecks, in which at least 1,000 people are feared to have died while making the perilous crossing from north Africa to Europe in flimsy boats.

During that same week, some 13,000 were rescued by either the Italian navy or EU rescue vessels. Many were children, including a nine-month-old baby who was orphaned after losing her mother at sea.

With its long, exposed coastline on either side, and its islands, Italy has led the way with the number of migrants arriving by sea, taking in 170,000 in 2014.

Greece helped to share some of the burden in 2015 as migrants sought an easier route into Europe, but the year was none the less challenging for Italy as France stepped up controls at the Ventimiglia border.

It was also a year that tested the limits of Italy’s compassion, with regional leaders, mostly in the north, refusing to welcome more migrants, and the summer months being marred with protests as resentment among Italians grew. A further sign that the country’s patience is wearing thin came on Wednesday when Interior Minister Angelino Alfano said, “Italy has a big heart but we can’t take everyone in”.

With over 46,700 migrant arrivals since the start of this year, and an estimated 200,000 expected during the course of 2016, the next few months are shaping up to be what could be Italy’s most challenging period yet.

Italy is struggling to accommodate everyone With refugee centres in Sicily, the principle arrival point, full, the government earlier this week again called on regional leaders to quickly find accommodation for migrants.

In a circular, the Interior Ministry asked 80 provinces to house 5,600 migrants between them, with Lombardy, Lazio and Campania expected to share most of the burden.

That could prove difficult for Campania, where refugee centres in Naples, the region’s capital, have already reached capacity.

City leaders recently put out numerous requests for space, but were only able to house 50.

Migrants are starting to arrive in Puglia

Migrants have started to arrive along the south-east coast of Puglia. There have only been 100 or so arrivals over the past few weeks, but leaders there worry that number could escalate over the next few months, especially now that the so-called Balkan route via Greece is closed.

Puglia president Michele Emiliano fears as many as 150,000 migrants could land in the region this year.

Hoteliers are also concerned about the impact the potential influx could have on the region’s vital tourism sector.

“The tourism sector is strongly affected by certain influences – just look at what happened in Lampedusa, where tourism has been hurt since the island became a place for thousands of migrants,” Francesco Caizzi, the president of Federalberghi, the Italian hotel association, for Bari province, told The Local.

Until last summer, many migrants were able to slip into France and Austria from Italy, a journey that was relatively unhindered until France effectively ‘closed’ the border, forcibly removing people from trains and carrying out stringent checks of cars and even mountain paths.

As tensions mounted between Italy and France, Italian authorities last September cleared out a refugee camp in the border town of Ventimiglia, which for months had been home to some 250 people. The problems have since been transferred to the Brenner crossing point, with Austria threatening to build an anti-migrant fence unless Italy stemmed the flow of migrants. Italy’s northern neighbour relaxed its stance after Rome reinforced migrant checks at the border in May, but depending on the number of migrants who make their way up north from the south over the next few months, that could change, leaving leaders in the northern region of South Tyrol fearing migrants could end up stuck there.

“The summer will inevitably bring more migrants to Italy – it’s not a problem that’s going to go away anytime soon,” Franz Kompatscher, the mayor or Brenner, told The Local. With fears of a summer revival, Austria is trying to drastically decrease the number of asylum claims in 2016 after processing 90,000 – the second-highest among EU states per capita – last year.

“What will happen after that? For us, it’s a concern.”

Hundreds of thousands are waiting to set off from Libya A joint report published by Europol and Interpol in May said there were around 800,000 migrants in Libya waiting to attempt the journey across the Mediterranean.

Meanwhile, some of those who survived recent shipwrecks have also said that traffickers are now offering “cut-price” deals of €400 for the boat journey to lure in new customers.