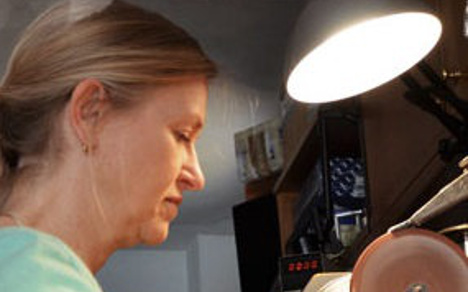 During the first years of running her mosaic export business, Christina sought advice from three different accountants on how to manage VAT on exports within the EU. All three professionals provided different answers, which meant she had to trade for the whole first year without charging VAT to EU clients. A simple and non-contradictory law did actually exist, but it was communicated so poorly that the actual professionals were not able to provide the right advise.

Kathy Moulton, who co-owns a maternity store and manages an online community,www.kalilacommunity.com, dedicated to prenatal well-being, also said that the lack of clarity regarding the tax laws came as a shock to her on launching her businesses in Italy. “All of the power in running a business in Italy seems to be on how savvy your accountant is. This was a whole new concept to me. In Canada I always took care of my own personal and business tax declarations.”

Penalty of success: “I had to take out a mortgage to pay my taxes.”

In 2008 Christina’s mosaic business peaked when she was awarded the contract for the supply of mosaic tiles for the Al Baraij Bait towers in Mecca, Saudi Arabia – one of largest mosaic project in the world. This was a major milestone for her business at the time but the tax implications on the growth of her business almost proved disastrous.

In Italy the tax system is based on a model of balance and advance payments. This means that every year you will have to pay the balance of the tax pertaining to the previous year and on the basis of the same projected income for the current year, two advance payments must be made to cover the taxes due for the following year. This means that if you grow your business you will not have “banked”, purely by default, enough taxes in the previous year to pay for the current year. The upshot of this can be crippling for small start-ups in their first years and for established businesses that go through exponential growth, as in Christina’s case. The year of the tower project Christina actually had to take out a new mortgage in order to be able to cover her tax bill.

Ignazio Bellitti, an accountant in the Brescia area of Italy, said that social security contributions (INPS) are also growing each year and are becoming another new default tax in Italy.“Contributions can range between 22and 29 percent. This becomes an additional hemorrhage for a small entrepreneur or start-up.”

Only the big kids are allowed to play

The business administration rules in Italy are all designed with large business in mind and there are few existing parametres to fit the needs of small businesses or their more limited ability, to meet the requirements in place. Whereas in other countries like the UK, Canada or the United States there is a culture that encourages the spirit of entrepreneurship that is supported by government incentives, initiatives and tax breaks to empower small business success, Italy, on the surface, does not seem to be strong in that area.

“You need a safety certificate and the total costs involved in that whole process came to around €6,000. An officially hired employee then costs the business more than double their wage. If I pay an employee €1,000 a month, it costs about €2,200 with the taxes and social security contributions.”

However, for smaller businesses, with just one or two employees, it is very difficult to support both their wages and all the extras that are required by law. It becomes a catch-22 situation: the net cost of hiring is such that any initial extra business growth will not provide return on your investment for quite some time. That is….if you make it of course.

Linda Martinez owns and runs The Beehive, a cross between a budget hotel and an upscale hostel, in Rome.  She said: “The most difficult aspects of running our business have always been navigating the endless bureaucracy and keeping up to date with constantly changing laws and regulations. The costs of running a business are also very high – from staff costs to the day to day operational costs. Italy is not an easy place to do business or to expand unless you have money. The old adage of “money makes money” is very true here.”

Jody de Best gets “hands-on” moving the biomass at the Cremona site where she has recently designed a visitor's centre.Photo: Paolo Trentarossi

Jody de Best, originally from California, is an interpretive and museum design specialist in Lombardy, and owner of www.debeststudio.com.    She said that her decision to set up a Limited Liability company (SRL) with a local business partner was also based on fiscal implications. “I would have had to pay in order to work if I had continued to structure the business as an independent professional with just a VAT number registration. After number crunching I decided to leverage my strengths in the sector with the know-how from a local business partner with over 30 years experience. It was the most sensible shot of giving my business the chance to be profitable.”

Italy's government last year estimated the country's total losses to tax evasion at €90 billion a year. The shadow economy still very much dogs Italy’s economic growth and the honest taxpayers such as small businesses are the real victims:

Kathy explains: “There’s the underlying world of tax evasion in Italy that is extremely frustrating. No matter how hard you try to avoid it, it is ever present. It is also extremely demoralizing to see other businesses succeed because they choose to avoid taxes in a major way, especially when your very large tax bill then arrives.”

Italian Prime Minster Matteo Renzi has also been widely criticized for recent reforms which allow the limit on cash transactions to be tripled to €3,000 and for the raise from €50,000 to €150,000 of the amount of tax that can be evaded without criminal sanctions. The European Commission’s latest report 2014-15 cites small and medium enterprises as the backbone of the European economy, with 99/100 businesses registered as an SME. Nine out of 10 SMEs are in fact ‘Micros’, meaning they employ less than 10 employees. With this in mind, the small business owners like the ones I have spoken with, are often left wondering why there aren’t more measures in place in Italy to encourage the growth of this backbone economy.
Linda said: “If there was a spirit of change that meant the environment in which we conduct business was more supportive to entrepreneurs, Italy would also see a large return of the many who have left to pursue opportunities in more business-friendly places of the world.”

Amy West, an American, handcrafts bespoke glass and jewellery from her Murano studio in Veneto, www.amywestdesign.com. She explains that just opening a bank account in Italy was an arduous feat in itself. “Initially I was denied both opening the account and a credit card with a limit of €1,000, despite the fact that I had a letter from my US bank showing a six-figure balance in my savings accounts. It wasn't until I returned with my Murano engraving “maestro” who threatened to withdraw all of his and his family's banking business, that the bank begrudgingly agreed to open an account for me. However, I was given a credit card with a very low limit and one of the most expensive bank accounts available with “high risk” fees imposed because I was a foreign woman. I felt completely burned by this experience, so violated.”

Is a potential Brexit positive or negative? Christina Ayers: “I just can't actually imagine it happening. It seems so obviously and tremendously counter-productive and risky for everyone that I find it hard to believe the British public would actually support it — there would have to be a moment of mass delusional psychosis for it to pass. OK, that happens, it has happened before. But really it seems such an unlikely outcome. The optimist in me has faith in the British public.“

Amy West: “Having Great Britain leave the EU would make what I'm doing there, much more complicated and much less straightforward. I've been working quite successfully with a wonderful gallery in London, and having Great Britain as a part of the EU makes it all very easy and seamless, operating within the same general economic framework.”

Kathy Moulton: “If Great Britain exits, I think it would be a bad thing from an European (and dare I say global) perspective. The flow of goods would obviously be hindered. The products that we order for our business that arrive from outside of the EU are always a much bigger headache than the ones that arrive from within, so ordering from the UK would become much more complicated for us.”

Ginny Bevan: “I can’t see it as a good thing. Europe is not doing well (at least the southern half isn’t). There’s going to be a ripple effect in many laws and regulations that no one yet knows what will be the impact.”

Emma Cuthbertson, originally from Cornwall in the UK, runs La Piccola Agency, a boutique Marketing and PR agency in Lombardy. Emma's background is marketing communications and PR in the IT sector. She has lived and worked in Barcelona, London and Milan.