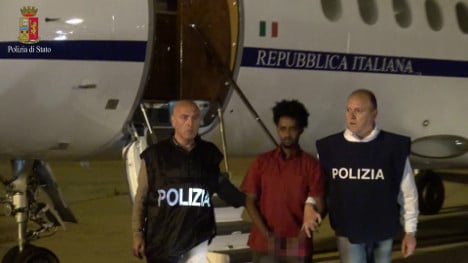 Mered Medhanie, who is believed to have arranged the deadly boat journey in November 2013 during which over 350 migrants died off the coast of Lampedusa, was detained in Sudan on May 24th and brought to Rome on Tuesday, Italian police said in a statement.

The investigation was led by prosecutors in Palermo with the help of British authorities, who had been assisting with the probe into the Lampedusa tragedy.

Medhanie, who allegedly boasted that he has “the style of [Moamer] Kadhafi, there is nobody stronger than me”, is suspected of being the leader of one of the biggest criminal groups operating between central Africa and Libya.

He was also allegedly overheard in tapped phone conversations laughing about “always putting too many people on the boats,” before adding, “but they’re the ones who want to leave quickly”.

Medhanie is suspected of organizing dozens of trips, and was also overheard bragging about trafficking thousands of people, and discussing how to invest his earnings.

He allegedly charged migrants up to €5,000 each to make the journey to Europe.

“It’s better to invest in America or Canada,” he said. “There they don’t ask where the money came from.”

Police said he also repeatedly spoke of his intention to leave Libya, possibly going to Sweden, where his wife lives, but “only after obtaining valid documents and a safe place to deposit the huge sums of money accumulated”.

Medhanie, who is the first major people-smuggler to be imprisoned in Europe, will appear in court on Wednesday.

More than 10,000 migrants have drowned in the Mediterranean while trying to reach Europe since the beginning of 2014, a spokesman for the office of the UN High Commissioner for Refugees (UNHCR) said on Tuesday.

Some 204,000 migrants and refugees have made the crossing since January this year and more than 2,500 have died – the vast majority of them on crossings between Libya and Italy.