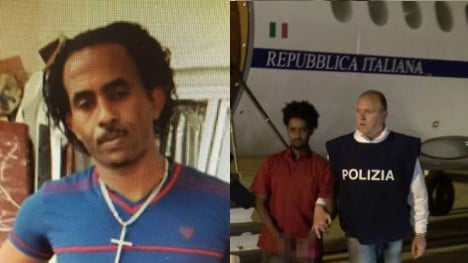 (L) An image of Medhanie Hedego Mered previously issued by the NCA and the one, claiming to be him, released by the Italian police on Wednesday.

The suspect, identified by Italian authorities as Medhanie Yehdego Mered, 35, is accused of shipping thousands of people to Europe and sending some to their deaths in the Mediterranean.

Dubbed 'the general' for his control over a vast area and number of 'troops', and described as “cynical and unscrupulous”, Mered has been described as a people smuggling kingpin.

But Italian prosecutors admitted on Thursday that they were checking his identity after reports claimed he was the victim of a case of mistaken identity, and a woman claiming to be his half-sister said he was just a simple carpenter.

Lawyer Michele Calantropo told AFP his client “denied being the suspect and also denied being linked in any way to a trafficking network” when questioned by Italian magistrates.

Sudan's interior ministry, Italian police and Britain's National Crime Agency (NCA) had made much of Mered's arrest in Khartoum at the end of May and his deportation to Italy this week.

But family and friends soon came forward to say the man pictured being dragged off a plane in Rome was not 'the general', identifying him as someone with a different name.

Calantropo was hired by a woman claiming to be the sister of the detainee, a man she named as Mered Tesfamariam.

Segem Tasfamariam Berhe, who said she had recognized her 27-year-old brother in the footage, told Italian media he had nothing to do with human trafficking.

“I want to tell Italian police my brother is innocent, he is not the man they are looking for. Please, investigators, release my brother,” she was quoted as saying from Khartoum by Italy's Rai News.

From Eritrea's capital of Asmara, a woman claiming to be his stepsister, Saliem Kesete, told the Italian broadcaster that Mered Tesfamariam “was a carpenter, with a family”, describing him as an “innocent man” who had “wanted to go to the US”.

“Europe was his second choice,” she said.

Key suspect Mered, who has been wanted on smuggling charges since 2015, is accused of packing migrants onto a boat that sank in 2013 off the Italian island of Lampedusa, claiming at least 360 lives in one of the worst disasters in the Mediterranean.

He reportedly described the sinking as “Allah's will” and is accused of organizing the smuggling of up to 8,000 people a year.

Wiretaps of his conversations show him having contact with traffickers in northern Europe, particularly in the Netherlands and Scandinavia, and he held a “senior position in a criminal network operating in several continents”, Italian police said.

In phonecalls with his family, he sounded loving, making several references to leaving Libya and moving to Sweden to be with his wife, but by contrast, had showed “utter disregard for the lives of the migrants”, Italian police said.

His capture was hailed by officials as a significant blow to the people smuggling business as Europe moves to stem the flow of migrants across the Mediterranean.

According to the UN's refugee agency (UNHCR), over 49,600 people have arrived in Italy by boat so far this year.

More than 10,000 people have died crossing the Mediterranean to Europe since 2014.