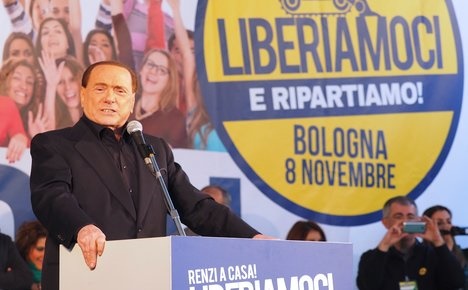 First indications were that the four-hour open-heart operation to replace his aortic valve at the San Raffaele hospital in Milan had been successful.

“The operation was finished a little after midday and there were no complications in the operating theatre,” a hospital statement said, adding that Berlusconi had been transferred to an intensive care unit.

“Everything is okay guys, now I can speak more calmly,” Gianni Letta, a close political ally of the billionaire leader of Forza Italia, told the AGI news agency.

The flamboyant media mogul and football club owner, who dominated Italian politics for two decades, is expected to spend several days in intensive care and several weeks in hospital in total.

Berlusconi's 30-year-old companion, Francesca Pascale, was seen at the window of his hospital room shortly after the surgery began, looking tearful and clutching a handkerchief.

The operation was conducted by Ottavio Alfieri, the head of the hospital's cardiac surgery unit.

The ageing billionaire, notorious for his brushes with the law and his “bunga bunga” sex parties, was admitted for tests at the hospital on June 7th after suffering a heart attack.

“He arrived at the hospital in a severe state, he risked his life, he risked dying and he knew it,” Berlusconi's doctor Alberto Zangrillo told a news conference last Thursday.

He said the fault in the valve was “severe” and without the operation, “the risk of him dying within the year would be 10 percent”.

But Zangrillo said he expected Berlusconi to be back to full health within a month, adding that successful surgery would leave him “better than before”.

The tycoon, who has largely dropped off the political radar in Italy, was facing the operation “with great courage and determination”, he added.

The one-time cruise ship singer turned centre-right politician suffered a heart attack 10 years ago and had a pacemaker fitted in the United States.

The device was replaced at the end of last year.

“Naturally, I am concerned,” Berlusconi wrote on his Facebook page on Monday.

“But I am also very moved by the very many demonstrations of appreciation, support and affection which I have received from everywhere, even from political rivals.”

Matteo Salvini, the head of the populist Northern League – a sometime ally but also rival on the rightwing of Italian politics – sent Berlusconi “best wishes for his quick return to the field”.