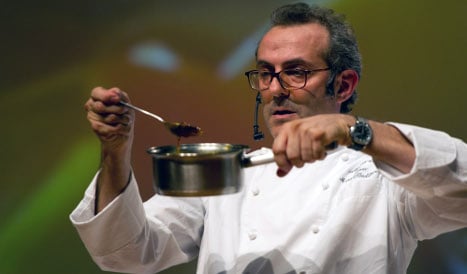 A photo of Massimo Bottura, whose Osteria Francescana has been crowned best restaurant in the world, taken in 2011. Photo: Yasuyoshi Chiba/AFP

The Osteria Francescana in Modena in the north of the country – which was praised for its use of Parmigiano Reggiano cheese – pipped last year's winner, Spain's El Celler de Can Roca, to top the World's 50 Best Restaurants list, after coming second in 2015.

Chef Massimo Bottura was overcome with emotion as he accepted the award at a glitzy ceremony in New York late Monday.

“I want to thank everyone because it's been so hard, our job is all about art,” Bottura told his cheering supporters.

But even as Bottura and his team celebrated, a row blew up about the exclusion of a raft of top French chefs, including Joel Robuchon – a fixture of the list since it was launched 14 years ago.

And Andrea Petrini, who chaired 50 Best's French arm for more than a decade until his departure in September, questioned how only two French chefs working in France could have made the grade.

“It is a massive surprise. It's inexplicable,” he told AFP. “Are they really saying there are twice as many great Mexican and Peruvian restaurants as French ones?

“If you look at the place occupied by Latin American restaurants, you have to ask some questions,” he said, referring to allegations of lobbying and cosy deals between restaurants and jury members that have dogged the awards.

And he claimed that the British-based list “has always had a problem with France.”

Even so, he said he was shocked that “a major figure such as Robuchon had been relegated from the field”.

Last year Robuchon, himself a former 50 Best judge, had criticized its transparency, claiming the list had become prone to “cronyism, 'flip a coin' voting, geopolitical influence and lobbying.”

50 Best editor William Drew hit back strongly at the allegations, telling AFP that it was “France that had a problem with 50 Best” rather than the other way around, and that voting had been overseen by consultancy firm Deloitte.

This year's French results were “a surprise for many people, including us,” he said. “But there are signs in our 51 to 100 Best list that French restaurants are coming back.

“French restaurants haven't suddenly become bad. It is just to get into the list you have to get a lot of votes, and French votes may have been spread” since the country has so many good restaurants.

While Italian-born Petrini hailed the four chefs from his homeland who had made the top 50, he said it was “difficult to believe… that Parisian restaurants recognized as important and inventive by the rest of the world (such) as Le Chateaubriand and L'Astrance” had not.

He said that 50 Best's problem was that it began as a “snapshot, a playlist of the most interesting, intriguing restaurants and it never claimed to be scientific … It did not demand any rigour or exactness.

Drew admitted 50 Best “was a snapshot. It is not scientific. But it is based on the opinions of experts all around the world.”

But he rebutted claims that sponsors could sway results. “They have nothing to do with tourist boards or where we hold our events.”

Despite the row, Petrini said Bottura was a worthy winner, and the choice appears to have won support from an unlikely quarter – French President Francois Hollande.

The chef told La Repubblica daily that after the French leader dined with his Italian opposite number Matteo Renzi at the Osteria Francescana last year, Hollande said, “Italy 2, France 0. This is not cuisine, this is art.”

The rival French-based La Liste put the restaurant 18th in its classification, which aggregates the ratings of the world's most prestigious guides.