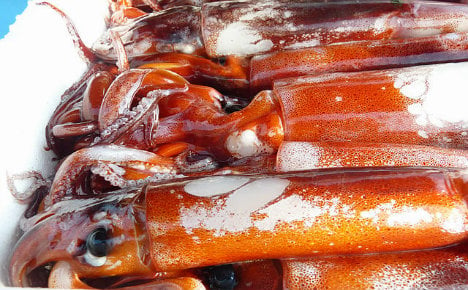 Italy has been told to stop washing squid and molluscs in hydrogen peroxide. Photo:Ji-Elle/Wikimedia

The Italian Health Ministry has long approved the use of the chemical “to wash frozen and fresh mollusks and cephalopods,” meaning squid and certain shellfish are routinely rinsed in hydrogen peroxide solution, La Stampa reported.

Although hydrogen peroxide solutions are perfectly safe for human consumption, the chemical acts as a bleaching agent which makes certain fish seem whiter and more attractive to the customer.

The EU has told Italy to end the bleaching, which is in flagrant violation of EU law.

“Hydrogen peroxide is not a substance which the EU authorizes for use with certain foodstuffs,” read a note sent to the Italian Health Ministry.

“We therefore ask Italy to provide producers with clear information about which solutions can and can't be used to wash seafood.”

For the EU, the ban on hydrogen peroxide is to prevent producers from exploiting its bleaching action to make older seafood seem much fresher than it is – a trick it is almost impossible for consumers to detect.

The ban on the use of peroxide aims at combating the growing phenomenon of seafood fraud, which sees consumers duped into paying over the odds for falsely labelled fish.

A recent survey by international ocean advocacy group, Oceana, revealed that one in three fish dishes sold in the restaurants of the Belgian capital Brussels, which hosts the European Commision, were fraudulently labelled on the menu.

“We need to make sure these rules are implemented in Italy and across all EU-member states to stop H202 from reaching our fridges,” Renata Briano, an MEP from Italy's Democratic Party, told the paper.