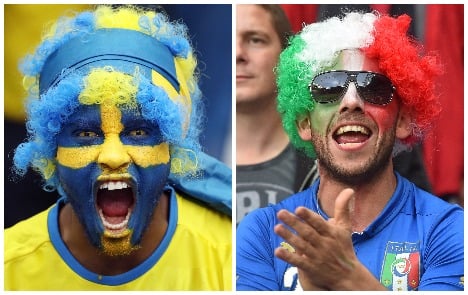 Whose fans will have the most to shout about? Photo: Kenzo Tribou Icccarsi/ Vincenzo Pito/ AFP As you might expect from the Italians, the squad is an impeccably well-groomed bunch, but this year's crop of talent (pun intended) is lacking some flair.

With Andrea Pirlo's lush locks and beard combination missing from the midfield and Mario Balotelli's postmodern patterns of headshaving not leading the line up front, the squad is composed almost exclusively of unimaginative short-back-and sides hairdos. A glance at the Sweden line-up from their most recent game against the Republic of Ireland doesn’t exactly suggest a wealth of creativity in the grooming department. Whether it’s Andreas Isaksson’s short back and sides, the shaved heads of Marcus Berg and Victor Lindelöf, or the schoolboy side partings of Kim Källström and Oscar Lewicki, most of Erik Hamrén’s troop are about as run-of-the-mill looking as it gets.

Fortunately, as is so often the case for Sweden, Zlatan Ibrahimovic saves the day. The striker’s man-bun with a beard combination may not be the most original in the world, but to his credit, he has been sporting it for five years or so now, beating plenty of hipsters to the punch. At least he stands out from the crowd, and saves a point for his country.

Italian food is famous the world over, and rightly so. The country is full to the brim of of great pizza and pasta dishes, but that's just scratching the surface of Italian cuisine.

The food is based around simple, fresh ingredients and is incredibly varied, delicious and healthy.

On the drink front, Prosecco now out-sells champagne and Chianti and Pino Grigio are among the most quaffed wines worldwide.

The only thing letting Italy down is its lack of decent beer, but it more than makes up for that with its coffee. While the Swedes are walking to work in the dark, knocking back huge vats of dirty dishwater coffee, the Italians are sitting down and sipping tiny thimbles of delicious, intense espresso in a sunny piazza.

Sweden’s food doesn’t carry the same prestige as Italy’s, but there’s plenty to love about the country’s cuisine. If you’re a seafood fan, the west coast in particular is a delight, with lobster, oysters and mussels plentiful, while the variety of pickled herring eaten at pretty much every major celebration can be surprisingly good.

If you’re feeling more adventurous, there’s also the two Michelin starred Fäviken Magasinet in Järpen, which was the subject of an episode of Netflix documentary Chef’s Table, and recently named among the top 50 best restaurants in the world.

As for the drinks, the Swedish beer of years gone by could be a touch on the gassy side, but with an abundance of microbreweries popping up in the country as of late, most needs should be more than catered for. IPA (Indian Pale Ale) in particular is plentiful and popular at the moment.

Wine isn’t Sweden’s strong point, but when it comes to the harder stuff, the northerners know a thing or two about drinking. Snaps, the powerful alcoholic drink consumed at festivities, comes in hundreds of different varieties and quite often comes accompanied with a song, and what’s not to love about that?


Italy: not a good place for building an ice hotel. Photo: Tiziana Fabi/AFP

Due to average summer temperatures above 20 degrees Celsius, ice hotels haven't really caught on, which is a shame.

Perhaps there are parts of the Italian Alps which get cold enough to build an ice hotel during the winter, but given the extremely low tolerance to cold most Italians seem to share it might be a hard sell.

In central Rome, there is a bar made from sculpted ice, which offers sweet refuge from the infernal temperatures reached in the city during the summer, but that's about it.

Sorry Italy, but unsurprisingly given that Sweden has a lot of, well, ice, it also has a pretty impressive Ice hotel – probably the most impressive of them all. First made in 1989, each year the structure is redesigned and rebuilt in Jukkasjärvi, 200km north of the Arctic Circle, and includes an ice church, ice bar, and ice sculpting studio. On top of that there are two heated restaurants for the faint hearted, as well as two wilderness camps for the more resilient guests.

As for Rome’s ice bar, Stockholm has one of those too, but that’s really small fry when you can stay in an entire building sculpted out of frozen water now isn’t it?

Italy has been leading the way in fashion design since the 11th century and over the years 'Made in Italy' has become a byword for quality and style.

The country boasts some of the biggest names in the industry and Milan's two annual fashion weeks are among the most important dates on the annual fashion calendar.

That said, the Italian dominance of mainstream fashion tends to stop alternative styles like punk or grunge from emerging, which then tend to arrive five years too late.

Swedish fashion is sleek, refined, and carries none of the snobbery of its Italian counterparts. Whether it’s affordable, high street brands like H&M or designer marks like Acne and Filippa K, the country more than punches above its weight when it comes to clothing.

“Less is more” is the key for Swedes, and with their products generally discreet looking but also effortlessly cool, there’s something for everyone. Scandi style is in at the moment, and Sweden is a huge part of that.

Italy is probably not considered 'an industrial powerhouse' in the same way that many northern European countries routinely are, however it is the fourth largest economy in Europe, in no small part thanks to its impressive industrial output.

Five percent of Italian industry is based around the production of cars and car parts.

From icons like the Fiat 500 to Ferrari and Vespa, Italian cars might not be as safe or as reliable as a Volvo, but they are so much cooler.

Both countries are famous for their elaborate glassware, but the glassmaker's art spread from the Venetian island of Murano, which for centuries has produced some of the finest glass in the world.

With a population around a sixth of the size of Italy’s, Sweden doesn’t command anything like the same scale of workforce as the Mediterranean nation, but what it loses in size it more than makes up for in creativity.

Start-ups and technology are key, with household names like Spotify, Skype, and Candy Crush producers King all coming from Swedish roots. If you have a young child, meanwhile, the chances are he or she will have played Minecraft, the hit game from Swedish developer Mojang.

On a per capita basis, Stockholm is the second most prolific tech hub in the world, helping Sweden to become the most competitive economy in the EU in 2016. Sweden has its own car giant too in the form of Volvo, but why focus too much on the present when you can look to the future?


The Italians are embracing nudity like never before. Photo: Joe Joe/Flickr

Italy is not really associated with public nudity and until 2006 nudist sites were officially illegal.

Although Italians tend to embarrass easily, there is a growing number of socially liberal Italians who love getting naked together.

Statistics from one Italian nudist association suggest that more than 600,000 people frequent the country's now legal nudist sites – and who can blame them?

Italy's 7,600km of coastline includes plenty of nudist beaches, whose azure waters and yellow sands make them the perfect places to spend the day in the buff.

Nudity isn’t a big deal for Swedes, who have some of the most liberal attitudes in the world to the subject. A 2014 survey by Expedia showed that more than a quarter of Swedish women have sunbathed topless, while there are a whole host of nudist beaches dotted across the country.

The Swedes love a sauna meanwhile, and if you’re thinking of indulging in a steam session, it’s worth keeping in mind that clothes off is the standard rule. It’s hard not to feel like these northerners are more forward-thinking than most of us when it comes to the human body, in fact, they probably have to drop a few points simply because they care so little.

There's plenty to love about both Italy and Sweden, but it looks like bragging rights will be decided by the outcome of the match.