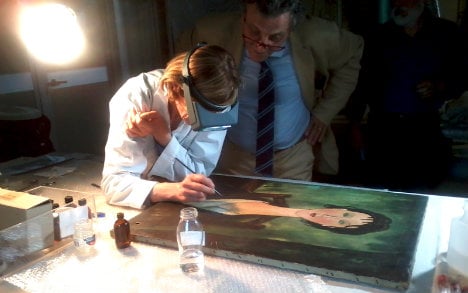 The picture, which shows a young woman, is thought by some to have been painted by Amedeo Modigliani and was salvaged from the rubbish tip by an avid 'skip diver', who now owns it, in the suburb of Rustica on the outskirts of Rome.

The salvaged portrait, entitled 'Odette', bore a large humidity stain and a hole which experts think was chewed by a passing rodent, but has been lovingly restored by Italy's Amedeo Modigliani Institute.

It will be on display at the Fesival dei Due Mondi in Spoleto, Umbria, from next Thursday.

“By putting the portrait on display we hope to encourage scholarly debate about its authenticity,” Franco Sensi, the institute's vice president, told The Local.

Until now, the portrait's authenticity has been fiercely contested with Modigliani experts in France – where the painter and sculptor lived and worked for much of his adult life – refusing to analyze the painting as they are convinced from photographs it is a forgery.

“Not one single element of the work corresponds to Modigliani's craftsmanship. Neither the theme, the chromatic structure nor the choice of structure,” experts from a French Modigliani group wrote in a letter to the painting's owner.

But Italian experts say there is reason to believe the painting is original.

“At that time Modigliani was practically unknown and his paintings worthless, so it's unlikely someone would have wasted the canvas and materials in producing a forgery, although it could have been produced by an admirer.”

“The figure is painted in his trademark style and the picture is signed by him,” Sensi added.

“We can't say it's definitely an original, but obviously the owner is very hopeful because Modigliani paintings are among the most valuable in the world.”

If scholars can agree on the painting's authenticity, it could net its owner millions.

Last November, a Modigliani portrait of a reclining nude sold for €154.6 million at auction – making it the most expensive work by an Italian artist in history and the seventh most expensive painting of all time.