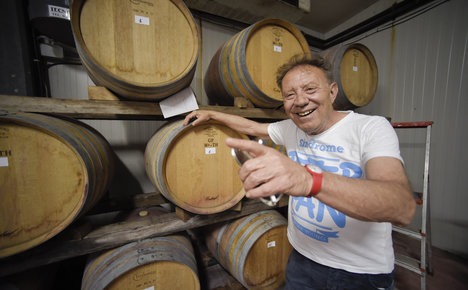 Luigi Cataldi Madonna was the first producer to market a pure pecorino based on the varietal name. Photo: Andreas Solaro/AFP

Yet pecorino, which shares its name with one of Italy's best-known cheeses, might not even exist but for the vision of a trailblazing pioneer fondly remembered by his daughters as being “a little bit crazy”.

The late Guido Cocci Griffoni is revered as a hero of Italian viticulture and his native region of Marche for having hauled the ancient grape back from
the brink of extinction.

In the early 1980s however, the self-taught winemaker was almost alone in identifying the potential of a varietal now enjoying critical acclaim and commercial success after a four-fold increase in plantings between 2000 and 2011.

“Pecorino is not just a great grape variety; it is also one of Italy's biggest wine success stories of the 21st century,” says writer Ian d'Agata, the author of “Native Wine Grapes of Italy”.

The grape's name is derived from the Italian word for sheep, “pecora”, which are ubiquitous in the hills of central Italy, where both wild and cultivated pecorino vines abounded in the 19th century, providing a ready snack for shepherds.

Professional grape growers turned away from pecorino to the higher-yielding but less characterful varieties trebbiano and malvasia, grapes generally destined to be made into non-descript wines by cooperatives lacking Cocci Grifoni's vision.

“Pecorino is not generous in yield terms and, at that time, volume was everything; farmers needed money,” explains Marilena Cocci Grifoni, who now runs the estate alongside her winemaker sister Paola.

But their father had a hunch that pecorino could produce interesting results and in 1982 he began experimenting with a parcel of wild vines acquired from an 80-year-old farmer no longer able to tend his garden vineyard at Arquata del Tronto, 1,000 metres (3,300 feet) above sea level in the Marche mountains.

Experimental samples were made from vines planted on four different slopes before the decision was made to go with the coolest of them, a steep north-facing slope licked by salty breezes from the Adriatic Sea.

A peach orchard was ripped up to make way for what is now the “mother vineyard” and the first Cocci Grifoni Pecorino was made from the 1990 harvest.

That year's production had to be bottled as a humble table wine but recognition was to come quickly.

In 2001, Pecorino from the Offida area was granted DOC or controlled origin status. A decade later it completed an extraordinarily quick ascent to the top rank of Italian wine by obtaining the DOCG classification occupied by the likes of Barolo and Chianti Classico.

Export markets are the next horizon with the wine now starting to appear on the shelves of British supermarkets and restaurant wine lists in North America.

Winemaker Paolo says a good pecorino should smell of tropical fruits but also display balsamic, herbal and honey notes thanks to the grapes' combination of high sugar and high acidity.

“The sugar means it is always strong in alcohol and the acidity brings freshness,” she says. “These two elements give the wine its potential to age and this evolution leads to a particularly complex range of tastes.”

Marilena says their father would regard the pecorino success story as a miracle.

“He has given the possibility of work to the children of farmers who believed there was no future in their area. Now young people are deciding to stay, to invest and not to abandon the vines. This is what he'd be proudest of.”

Despite Cocci Griffoni leading the way in Marche, more pecorino is now produced in Abruzzo, where Luigi Cataldi Madonna was the first producer to market a pure pecorino based on the varietal name.

“The Cocci Griffonis rediscovered pecorino but I was the one to baptise it,” says the university philosophy lecturer.

Cataldi Madonna says acidity-based freshness should be the defining quality of a pecorino, and his lead has influenced the style of other producers in Abruzzo.

“If I need to meditate I read Saint Augustine, I don't drink a glass of wine,” he told AFP, saying he has no time for those who seek to elevate fermented grape juice into something overly complex.

“I drink when I'm happy, with friends and having fun. That's what wine is for.

“The only noble drink is water!”

Wine expert D'Agata meanwhile warns that rapidly expanding production could make pecorino a victim of its own success.

“Right now it is Italy's hottest white. And there is no doubt it can give complex, age-worthy wines,” he says.

“But it is being planted everywhere and from high yielding biotypes, whereas pecorino is a low yielder by definition. The result is that a lot of Pecorino doesn't resemble what I think the wine should smell and taste like.”