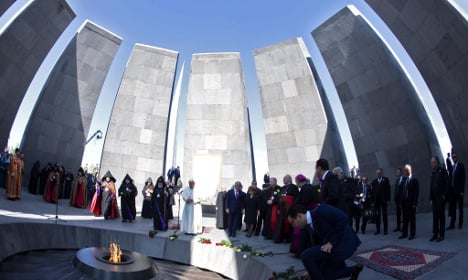 Francis laid a wreath and prayed at the Tsitsernakaberd site. Photo: AFP

Accompanied by President Serzh Sarkisian, Francis laid a wreath and prayed at the Tsitsernakaberd site where 12 giant stars represent the regions where Armenians says Ottoman forces killed some 1.5 million of their people between 1915 to 1917.

“I pray here, with pain in my heart, that such tragedies will not happen again, that humanity does not forget and knows how to overcome evil with good,” Francis wrote in large golden book of commemoration.

“May God protect the memory of the Armenian people! Memory cannot be stifled or forgotten! Memory is a source of peace and future!”

Beginning his three-day visit on Friday, the pope had denounced the mass killing of Armenians by Ottoman forces as “genocide”, risking Turkey’s fury.

“Sadly this tragedy, this genocide, was the first of the deplorable series of catastrophes of the past century,” he said at the presidential palace in Yerevan.

When Francis last used the term in the Vatican in 2015, on the centenary of the killings, Ankara angrily recalled its envoy from the Holy See for nearly a year.

Armenians have long sought international recognition for the World War I killings as genocide.

Turkey — the Ottoman Empire’s successor state — argues that it was a collective tragedy in which both Turks and Armenians died.

Speaking later to some 20,000 people in the main square of Armenia’s second-largest city of Gyumri — the spiritual centre of the country’s Roman Catholic community — Francis reiterated the need to maintain the collective memory of the Armenian people.

“There is another memory we need to preserve: it is the memory of a people,” the pope said.

“Peoples, like individuals, have a memory. Your own people’s memory is ancient and precious.”

Armenia is considered the first nation in the world to adopt Christianity as a state religion in the early 4th century.

According to the 2011 census, some 96 percent of the ex-Soviet country’s population of some three million belong to the Armenian Apostolic Church.