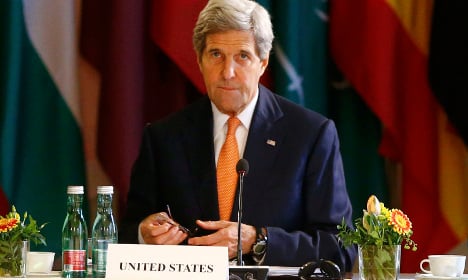 Kerry, who flies to Brussels and London on Monday for crisis talks with EU and British leaders, said the ideal of unity must remain paramount as Britain negotiates “Brexit”.

“An EU united and strong is our preference for a partner to be able to work on the important issues that face us today,” Kerry told reporters during a visit to Rome.

“One country has made a decision, obviously it's a decision that the United States had hoped would go the other way,” he said, alongside Italian Foreign Minister Paolo Gentiloni.

“The vote about Brexit and the changes that are now being thought through have to be thought through in the context of the interests and values that bind us together with the EU.”

Gentiloni said Brexit demonstrated the need for the EU to change.

“We are working to relaunch the Union in light of the decision by the British electorate.

“Our historic friendship with Britain and our alliance through NATO are not up for discussion.

“The challenge we have before us is to translate a crisis into an opportunity by turning a difficult moment into the occasion to relaunch the EU.”

But Kerry said he had no doubt that Europe would pull together and reassure the markets, noting that even without Britain the EU single market counts 455 million consumers.

President Barack Obama had also made clear his concern about the referendum, and now US officials are scrambling to try to stop the political crisis harming Western unity.

Kerry arrived in Rome on Sunday on a planned visit to have lunch with Gentiloni and a working dinner with Israeli Prime Minister Benjamin Netanyahu.

But officials on his flight said that on Monday he would fly on to EU headquarters in Brussels to meet EU foreign policy chief Federica Mogherini.

Mogherini had been expected to meet Kerry in Rome on Sunday, but she was busy dealing with the fallout of the dramatic vote, which stunned European and world leaders.

Hammond and Kerry are expected to hold a joint news conference before Kerry leaves to return to Washington.

Obama and Kerry have been at pains to insist the vaunted “special relationship” between Washington and London will survive what US officials view as the Brexit debacle.

But Washington foreign policy experts are all but unanimous in assessing that the White House will increasingly turn to core EU allies to defend its interests on the continent.

Obama himself, on a visit to London last month, warned British voters that their nation would go “to the back of the queue” for a US trade deal if they voted “out.”

US officials are also keen to help London's divorce from Brussels go through smoothly without inflicting further damage on skittish world financial markets.

But they, like many EU capitals, are also concerned not to allow Brexit to serve as an inspiration for eurosceptic forces in other members such as Italy or The Netherlands.

The London visit will be the first by a senior US official since Thursday's dramatic referendum, when voters demanded Britain leave the world's richest trading bloc.

Kerry's trip had originally been planned as an opportunity to meet Netanyahu and discuss regional security and the stalled Israel-Palestinian peace process.

But US officials played down the chance of any concrete progress, insisting that the pair meet regularly and that no new initiative would be on the table.