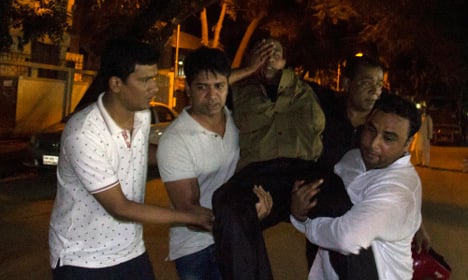 An injured man is carried away from the the Holey Artisan Bakery in the Bangladeshi capital. Photo: AFP

Twenty foreign hostages were killed at the Holey Artisan Bakery in the Bangladeshi capital, the Barmy said, in an attack claimed by the Islamic State (Isis) group that ended after a 10-hour siege when commandos stormed the building.

“Most of them had been brutally hacked to death with sharp weapons,” army spokesman Brigadier General Nayeem Ashfaq Chowdhury told reporters on Saturday.

Military officials said all of those killed were foreign, and that the dead included Japanese and Italian nationals, although exact numbers have not yet been specified.

Chowdhury told a news conference on Saturday that six militants and two police officers were killed, and 13 people were rescued.

The prime minister of Bangladesh, Sheikh Hasina, said one of the gunmen had been captured alive in the dawn raid.

More than 100 Bangladeshi commandos stormed the Holey Artisan Bakery in the diplomatic quarter of the capital early on Saturday after the 12-hour siege began on Friday night.

The deceased had been moved to the Combined military hospital in Dhaka for postmortem examinations.