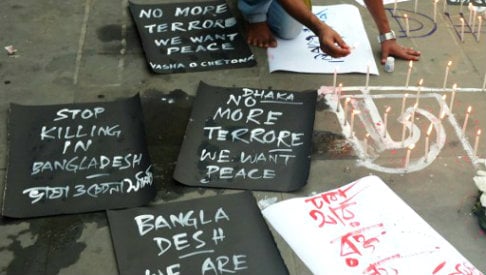 Twenty people were killed in the attack in Dhaka, the capital of Bangladesh. Dibyangshu Sarkar/AFP

The bodies will be flown back on a state aircraft, Il Messaggero reported.

Twenty people were killed in the attacks at the Holey Artisan Bakery. The other victims included seven Japanese, one American and one Indian.

The attackers stormed the cafe late on Friday, taking the foreigners hostage until troops entered on Saturday. Many of the victims were hacked to death.

A tenth Italian was in the restaurant when the attack unfolded but was not among the 20 listed as dead, he said.

Local media said the Italian dead included a 33-year-woman who had been in Bangladesh for 18 months for work, a 52-year-old woman textile executive and a 47-year-old entrepreneur who was the father of three-year-old twins.

Prime Minister Matteo Renzi had earlier prepared the nation for bad news, saying the country was “like a family which has suffered a painful loss.”

The attackers who believed they were “destroying our values” would not get a drop of encouragement from Italy, he said.

“We are stronger,” Renzi said.

“The terrorists want to rip away the daily fabric of our lives. Our duty is to reply with even greater force, by affirming our values, the values of freedom of which we are proud, and which are stronger than hatred or terror.”