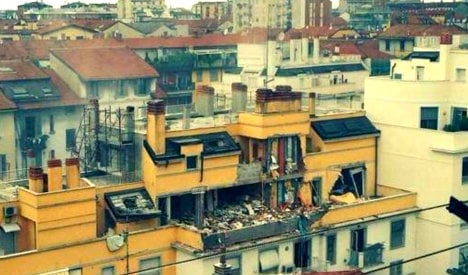 Giuseppe Pellicanò, 51, admitted to deliberately unhooking his Milan apartment's stove from the gas main in the early hours of Sunday, June 12th.

Prosecutors reported the leak had without doubt been caused by “deliberate manipulation”.

“The gas tap had been dismantled and the pipe connecting the mains to the stove loosened,” they wrote.

The sabotage eventually triggered a massive explosion which killed both Pellicanò's 43-year old wife, Micaela, and a student couple, both aged 27, who lived in the apartment next door.

The blast also left Pellicanò and his two daughters, aged 11 and seven, with serious burns.

Both girls remain in hospital with their injuries.

According to prosecutors, Pellicanò's desperate act was motivated by the 51-year-old advertising agency owner's failure to accept his wife's separation from him.

The pair had split up two years earlier, but were still living together for the benefit of their children, the youngest of whom is autistic.

After his failure to accept his wife had moved on, Pellicanò had begun seeing a psychologist and was being treated for depression.

Just four days before the explosion, he attacked the car of his wife's new lover, spray-painting it with profanities and slashing its tires.

On Monday, judges ruled that Pellicanò will not be granted bail due to his “vengeful and angry psychological state,” which make him a risk to others.

Judges also considered his “healthy economic conditions,” which increase the likelihood he would attempt to flee the country if released.