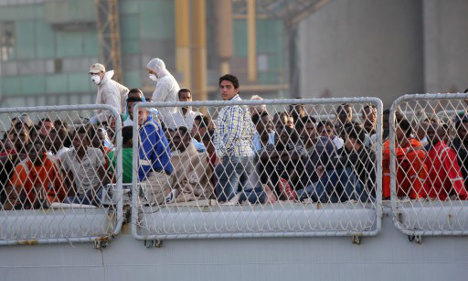 They are thought to belong to an international trafficking network, and have been charged with involvement in a criminal organization with illegal immigration, illegal money laundering and international drug trafficking.

The investigation by Palermo's anti-mafia unit was launched following the testimony of a 'repentant' people smuggler, Nuredin Atta Wehabrebi, who was sentenced to five years in jail in February this year – one of the first sentences in Italy for trafficking.

According to Wehabrebi, the network was also involved in organ trafficking. According to Italian media including La Repubblica, he told police that traffickers sold the organs of migrants who did not survive the journey to Italy – and even killed some who did not have enough money to pay the fee, in order to sell their organs for up to €15,000.

Wehabrebi is reported to have said he decided to collaborate with the justice system because “too many had died, in particular at Lampedusa on October 3rd, 2013”, Il Tempo reported, referring to the shipwreck which killed 359.

Police tracked the flow of money in the network, which had its 'financial hub' in Rome, in a perfume shop close to the central Termini train station. Here, €526,000 and $25,000 was seized in cash in June, along with a collection of financial accounts, containing names of foreign citizens.

While many migrants made the journey to Italy by sea, those who were able to pay more reportedly bought fake marriage certificates from the group, for around €15,000, allowing them to come to Italy on the grounds of family reunification.

Once arrived in Italy, migrants could pay more money to continue to their final destination, with the Netherlands and Sweden being the two most popular countries.

The group is thought to have reinvested the money made from trafficking migrants into the drugs trade, particularly khat, which they imported from Ethiopia.