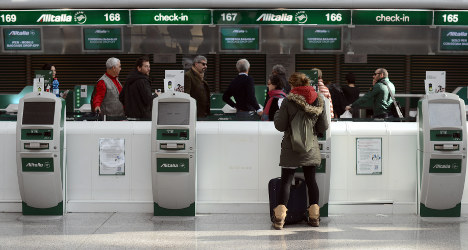 In a statement Monday it said the flights would be cancelled due to the strike by part of its staff protesting the ending of certain employee benefits.

The Alitalia statement apologised to customers for inconvenience, with airline boss Cramer Ball calling the strike action “incomprehensible and unfair.”

He said it was linked to the recent ending of a “privilege for pilots and staff members” which allowed them to travel for free from different parts of Italy to get to or from their bases in Rome or Milan.

The decision to end that arrangement was taken “to save money, and in line with other airlines in Europe and the rest of the world,” the statement added.

The Fit-Cisl labour union condemned what it said was an “attack on the rights of workers,” stressing that Alitalia staff had “always shown a great responsibility and professionalism,” including in tough times.

“The strike, the first for many years, stems from working and living conditions for staff who are subject to decisions which have never been discussed in advance,” said the union's boss Nino Cortorillo.

Around 20 flights operated by another Italian airline, Meridiana, have also been cancelled.

The carrier has seen a surge in staff calling in sick since the conclusion of an agreement last week to cut 396 flights from its schedules immediately as part of efforts to secure a last-chance partnership with Qatar Airways.