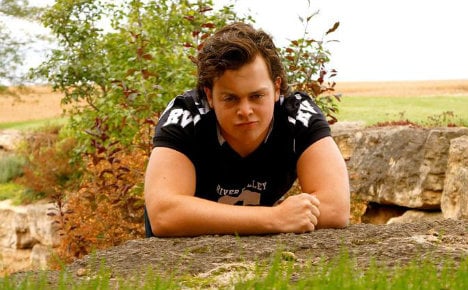 Massimo Galioto, from Rome, was arrested for manslaughter, police said in a statement.

Solomon’s body was found in Rome’s Tiber river, near Ponte Marconi, on Monday morning, three days after he went missing.

Galioto's companion, with whom he shares a tent on the embankment, told Italy's Rai Uno he had not meant to hurt the student.

A drunk Solomon had “bumped into Massimo and they began to argue. They were pushing each other. Massimo pushed him, the boy pushed back, and then he fell in the water,” she said.

Two witnesses told police they saw a man being thrown into the river in the early hours of Friday morning.

Solomon had arrived in the capital on Thursday to undertake a five-week course at John Cabot University.

The friend had reportedly lost contact with Solomon at around 1am while together at a bar in Rome’s popular Trastevere area.

Solomon’s body, which had suffered a wound to the head, was identified by his family, who flew to Rome on Sunday.

Police suspect Solomon may have hit his head on a rock when he fell in. It was not clear what he was doing on the embankment.

His bank card had been used while he was missing by someone who withdrew over €1,500 ($1,675) in Milan, but Galioto's companion said the homeless man had nothing to do with the theft, accusing foreign thieves instead.

Galioto returned to his tent and went to sleep after the incident, instead of alerting emergency services, Italian media reports said.

Solomon had reportedly survived a rare form of cancer as a child and hoped to enter politics after university.

John Phillips, the US Ambassador to Italy, on Tuesday sent his condolences to Solomon’s family.

“I was saddened to learn of the tragic death of Beau Solomon,” he said in a statement. “My heart goes out to his family and friends. The U.S. Embassy stands ready to provide support to Italian authorities investigating his disappearance and death.”

John Cabot University also said in a statement on its website: “John Cabot University is greatly saddened by the death of Beau Solomon, a visiting student from Wisconsin Madison. Our hearts go out to his family and friends, and we are committed to assist the family in any way possible.

“John Cabot remains in constant contact with the Italian authorities and the US Embassy as the investigation into Beau’s death unfolds. There have not been any indications of elevated threats to our students or the local community. The University continues to work tirelessly to ensure the safety and well-being of all our students.”