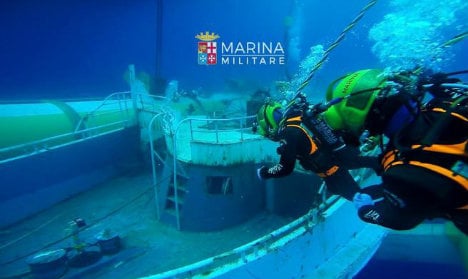 The boat, which was at depth of 370 metres (more than 1,200 feet), was salvaged recently. Photo: Marina Militare

The boat, which was at depth of 370 metres (more than 1,200 feet), was salvaged recently. It was the worst sinking in the Mediterranean in decades, according to 28 survivors rescued in April last year.

The overcrowded vessel, which had left from Libya, ran into a Portuguese cargo ship sent to its aid. Nearly 220 bodies were recovered at the time in and around the wreck.

After bringing up the boat, the Italian navy placed it late on Friday at a special site near the NATO base at Augusta on the island of Sicily.

Italian firefighters have been working non-stop ever since and have already recovered the remains of dozens of people, spokesman Luca Cari told AFP.

After finding remains on the bridge of the boat, firefighters are now preparing to enter the hold, where a camera has revealed there are more bodies, including those of children.

“It's a hard job, not only from a technical point of view but also emotionally. Humans are not made to have to deal with such a horrible situation,” said Cari, adding that a team of support personnel was also on site.

Forensic doctors are also there to try to identify the victims who will be buried in various cemeteries in Sicily.

Since 2014 more than 10,000 migrants have died or are missing trying to reach Europe in dangerous sea crossings, mostly in the Mediterranean, according to the UN refugee agency (UNHCR).