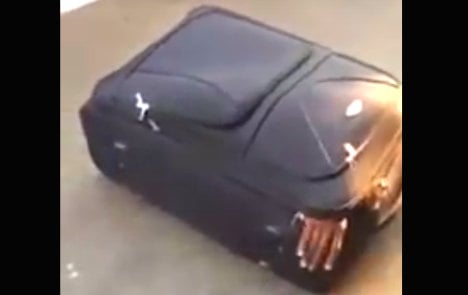 The migrant was trying to make his way into Switzerland from Italy. Photo: Screenshot/YouTube

The 21-year-old migrant lacked the correct papers to leave Italy and had been smuggled onto a Switzerland-bound train at Milan's Central station by a friend who was travelling legally.

Once the train reached Chiasso, a town just over the Swiss-Italian border in the southern canton of Ticino, guards boarded the train to carry out checks.

But their suspicion was quickly aroused by the strange shape and extreme weight of the suitcase, which was removed from the train.

Guards placed the luggage on the platform, at which point the young migrant-contortionist calmly emerged. A video below, uploaded to YouTube on Monday, shows the feat.

The trick did little to impress border guards however, and the migrant and his friend were immediately sent back to Italy.

The young Eritrean is not alone in attempting to make it out of Italy, where refugees and migrants are often forced to wait up to two years to receive documents that will allow them to work.