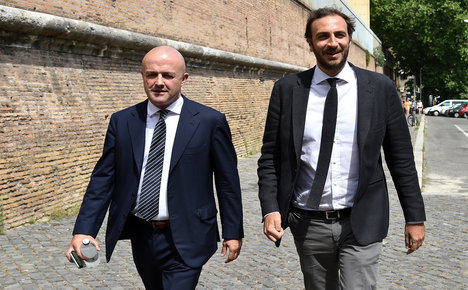 Italians Gianluigi Nuzzi and Emiliano Fittipaldi, who had published books based on the documents at the heart of the trial, were not considered to have committed a crime on Vatican territory and therefore were outside the judges' territorial authority.

Spanish prelate Lucio Vallejo Balda, who had admitted to leaking secret papers, was handed a 18-month prison sentence while his assistant, who prosecutors admitted had had little to do with the scandal, was acquitted.

Italian PR expert Francesca Chaouqui, described as having inspired the leaks, was given a 10-month suspended sentence.

“Today is a historic day. This is the base of democracy, freedom of the press,” Nuzzi told journalists outside the court house in the tiny city state.

Fittipaldi said the Vatican had been “courageous”, adding that he had not expected to be acquitted.

The leaks scandal, the second to hit the Vatican, rocked the Roman Catholic Church with its accounts of theft and greed, along with publication of secret recordings of Pope Francis's private conversations.

The books published by Nuzzi and Fittipaldi depicted the Vatican bureaucracy on the verge of implosion due to a cocktail of chronic over-spending, feeble accounting systems and serious irregularities in several departments which may have masked corruption.

Balda, who may appeal the verdict, spent nearly two months in a police cell last year before being released to a state of semi-liberty ahead of the trial.