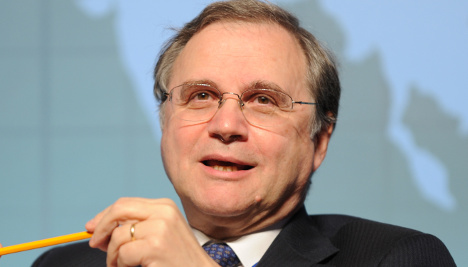 “Given the risk that, in a context of high uncertainty, limited problems could undermine the trust in the banking system, a public intervention cannot be excluded,” Visco said in a speech to the Italian Banking Association.

The bad debt predicament poses political as well as economic difficulties for Prime Minister Matteo Renzi, who has run up against new eurozone rules which limit the bailing out of banks through public money unless investors are required to bear part of the burden.

Finance minister Pier Carlo Padoan assured spooked shareholders on Friday that Italy was “continuing to explore all ways to allow public intervention in the banks within state aid rules… to protect savings”.

Raj Badiani, Senior Economist at IHS Global Insight, said the government's hopes of persuading Germany and the EU to soften the rules were slim, amid little appetite to give Italy a free hand.

“A possible compromise is that state support of stressed banks could be permitted if accompanied by some EU conditionality”, he said.

A scheme to rescue Greek private banks a year ago came with demands that the rescued lenders dispose of assets and cut jobs.

Renzi, desperate to avoid not only a banking crisis but a public backlash which could handicap a key referendum on constitutional reforms later this year, is extremely wary of angering the country's army of small investors.

He is also keen not to score an own-goal against the country's growing band of eurozone sceptics.

“Ultimately Renzi may have little option but to proceed with state bailout plan without EU approval, not only to protect the fragile recovery but to fend off domestic cynicism about the costs of Italy's membership of the Eurozone,” Badiani said.