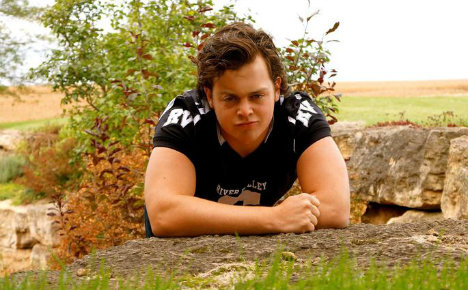 The body of Beau Solomon was found in Rome's river Tiber on Monday. Photo: Facebook

Massimo Galioto, 40, was detained on Tuesday after the student’s body was found on Monday morning.

Galioto, who refused to respond to the judge's questions, has been charged with murder aggravated by futile motives.

Solomon had arrived in the capital on Thursday to undertake a five-week course at John Cabot University.

The friend had lost contact with Solomon at around 1am while together at a bar in Rome’s popular Trastevere area.

Solomon’s body, which had suffered a wound to the head, was identified by his family, who flew to Rome on Sunday.

Police suspect Solomon may have hit his head on a rock when he fell in the river. An autopsy on Wednesday revealed he died by drowning.

It is not clear what he was doing on the embankment.

Galioto's companion, with whom he shares a tent on the embankment, told Italy's Rai Uno he had not meant to hurt the student.

An allegedly drunk Solomon had “bumped into Massimo and they began to argue. They were pushing each other. Massimo pushed him, the boy pushed back, and then he fell in the water,” she said.

Two witnesses told police they saw a man being thrown into the river in the early hours of Friday morning.

Solomon's bank card had been used while he was missing by someone who withdrew over €1,500 ($1,675) in Milan, but Galioto's companion said the homeless man had nothing to do with the theft, accusing foreign thieves instead.

Galioto returned to his tent and went to sleep after the incident, instead of alerting emergency services.