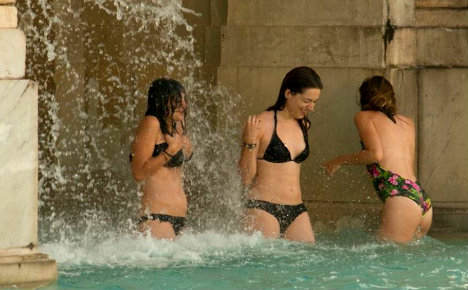 Three tourists were snapped taking a dip in one of the Eternal City's historic fountains. Photo: @TrastervereRM/Twitter

The three young women decided they couldn't take the sweltering Roman summer anymore and decided to cool off by leaping into the 17th century Fontana dell'Acqua Paola on Friday.

While it may seem like a good way of escaping the summer heat of the Eternal City, leaping into fountains is not looked upon kindly by Romans and fountain-dippers can be fined up to €200 if they are caught by the forces of the law.

As the tourists frolicked and splashed in the fountain, a shocked onlooker took photos which were then published by the Twitter account Trastevere RM, which promotes the city of Rome through photos.

“It's very hot, but the fountain of Gianicolo [the common name for the Fontana dell'Acqua Paola] can't become a swimming pool for tourists,” they wrote. “Rome deserves more respect.”

“These guys are so rude,” commented one Twitter user.

“You should go and do something similar in England or Germany,” wrote another. “I'm going to tomorrow in my boxer shorts and swimming cap.”

The Fontana dell'Acqua Paola dates to 1612 and was recently immortalized in the opening scenes of Paolo Sorrentino's Oscar-winning film “The Great Beauty”.

It is not the first or last time the heat has got the better of tourists. Last summer six UK tourists were charged with indecent exposure after taking a night-swim in one of the city's historic fountains.