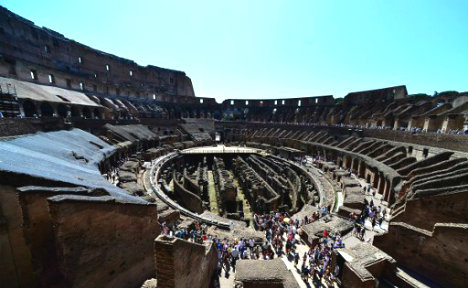 A new entrance to the Colosseum is set to open this week. Photo: Alberto Pizzoli /AFP

Between July 15th and October 31st curious visitors will be able to pass through a new entrance at the ancient stadium's eastern curve, through the bowels of the stadium and directly out onto the arena floor.

“The new door will let people feel like gladiators of the third millennium,” Rome's archaeological superintendent, Francesco Prosperetti, told La Repubblica. “Whoever enters via this door will remember it for the rest of their lives,” he added.

As well as providing a new visitor experience, experts hope the new entrance – the Colosseum's third – will improve tourist flows inside the landmark, which welcomes 6.5 million visitors a year and suffers congestion problems and queues during the summer months.

Between 1,800 and 2,400 tourists are expected to enter via the new door each day, but for the time being at least, the entrance will be reserved for tour groups that have pre-booked a special tour with an official guide.

Tour groups of a maximum of 50 people will be taken into the heart of the Flavian Amphitheatre, which was completed in 80AD, for a tour lasting no more than 20 minutes.

According to Prospetti, the brief tour will be enough to satisfy the needs of most tourists' needs.

“A lot of the groups we have coming in are on day trips to the city and are looking to get in and out quickly to meet the needs of their jam-packed itineraries,” he said.

“Tourists who enter via the new door will still be able to further explore the rest of the structure once their tour is complete if they want to,” he added.

For four centuries after its completion the Colosseum was the scene of daily gladiator battles which were a popular form of entertainment in the city.

Gladiators enjoyed immense fame and fortune but given the perils of the job, which  involved frequent bouts to the death against ferocious animals or other gladiators, most only survived until their mid-20s.

Outside the stadium, where today's tour groups queue up to enter, hawkers once sold vials of popular gladiators sweat and blood to tourists as souvenirs.