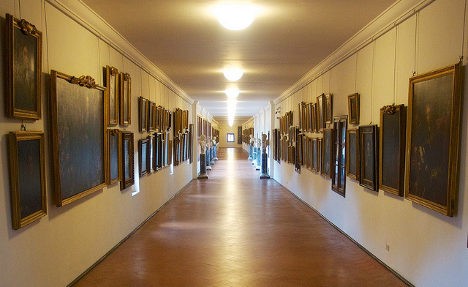 The Vasari Corridor was built in 1564. Photo: Mathrong

The sixteenth-century Vasari corridor, which links the Uffizi to the Florence's Pitti Palace, contains some 700 works of art. But it has been closed due to its excessive internal temperatures and lack of a fire escape.

While the corridor is not open to the general public, private tour operators have been taking groups of visitors through the tunnel for a cost of €45 per person since 2010.

But groups were forbidden from entering the corridor with immediate effect on Monday, following an inspection by the fire brigade.

The inspection was carried out after a group of museum workers and tour guides expressed their concerns about its safety.

“With the sudden closure, thousands of tours have been cancelled and tens of thousands of euros have been lost, putting as many as ten jobs at risk,” head of Florence's tour operators' association, Pier Carlo Testa, told the Florence newspaper, Il Tirreno.

“These tours have been going on for years. The passageway is hundreds of years old and in summer it's always hot in Florence… but that hasn't deterred tourists until now.”

While at the moment the cancellations will only affect private tour groups, the corridor's closure also scuppers plans to open the tunnel to the general public, which were drawn up by the museum's newly appointed German director, Eike Schmidt, earlier this year.

The corridor is expected to be closed until October at the earliest.

It is not yet known whether the pictures that line its walls, which include one of the world's most important collections of self-portraits, will be moved to a different location.