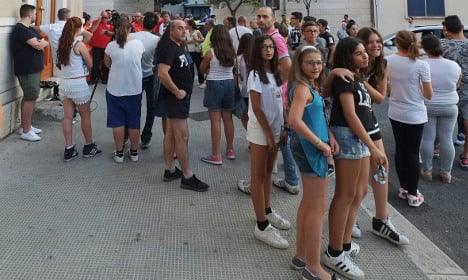 Photos of long queues of volunteers waiting to donate blood circulated on social media as the region came together following the deadly collision.

“Queues in Puglia to donate blood. What Obama said about the US also applies to us: we are better than we think.”

Hospitals had sent out an urgent appeal, asking “everyone in good health” to donate blood, and several Italian celebrities shared the request. Initially, the region had also asked for volunteer doctors and nurses to join the rescue efforts, but those injured have now been transferred to hospital.

“We thank the volunteers and donors who rallied immediately,” Vincenzo Saturni, president of Avis, the NGO which has organized the blood donation, said in a statement. “At this moment, our thoughts are with the families of the victims and the injured.”

Thousands of Italians turned up at the region's hospitals, some travelling from far away, and Saturni encouraged residents to pay attention to any new appeals from the hospitals and blood donation centres.

Ruggero Fiore, president of Avis Puglia, the local branch of the NGO, said that he was “moved by the overwhelming generosity of those in Puglia”, and said that while all of Italy's regions had been alerted to the need for blood following the incident, for the moment the situation was under control – largely thanks to the swift and widespread response from volunteers.

To deal with the emergency situation, all blood donation centres in the Puglia region will remain open on Wednesday until 7pm. Healthy volunteers of all blood types have been encouraged to donate, but on Tuesday, Avis had said there was a particular need for O+ blood.

The image in the Tweet below shows which hospitals are accepting donations, and what their opening hours are.

Emergency services worked through the night to extract people from the wreckage of the smashed carriages, in what one witness described as an “apocalyptic scene”. The cause of the collision has not yet been established, but on Wednesday doctors began the task of formally identifying the victims.