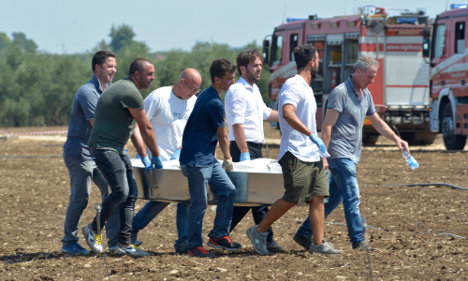 Rescuers carry a coffin after a head-on collision between two trains in Puglia. Photo: AFP

Shell-shocked families at the Policlinico hospital morgue in the southern Italy city of Bari were being called in turns to search among the dead for their loved ones in the wake of Tuesday's tragedy which left at least 25 people dead and some 50 others wounded.

The civil protection agency said 25 bodies had been recovered and two people were still known to be missing.

Red Cross workers asked for details to help identify the most badly mutilated bodies, from tattoos to scars and clothing colour.

“We can't rule out finding other people in the wreck. It's slow work,” said Luca Cari, spokesman for the firefighter department, as emergency services used a crane and diggers to clear crumpled carriages from the track near the town of Andria. Sniffer dogs were being used to search through the wreckage.

Officials said they had recovered the black box from one of the trains which investigators hope will throw light on the high-speed collision, which happened on a stretch of single track in open countryside, slinging some carriages into bordering olive groves.

One of the drivers was confirmed dead, with rescue workers recovering a hand and a leg from the mangled mess of his cabin.

Italy's Prime Minister Matteo Renzi visited the site late Tuesday, saying it was “a time to cry, be close to the families, show humanity in our pain,” and vowing to “throw light on what happened and who is responsible”.

Investigators said at least one of the trains had been travelling very fast, and it was possible the collision was caused by human error.

One of the four-carriage trains was supposed to have waited at a station for a green light before heading down the track between the towns of Corato and Andria.

Only five of the victims had identity documents on their person, the rest presumably in wallets or bags sent flying across carriages on impact, making it more difficult for authorities to name the dead, La Stampa said.

University students, farm workers and office employees were on the trains, as well as grandparents and children. The bodies of a mother and child were pulled from the wreckage, while a six-year old boy was found alive, next to his dead grandmother.

The trains were operated by private railway company Ferrotramviaria – just one of the 30 or so private companies which run on small lines criss-crossing Italy in areas not covered by national operator Trenitalia.

Ferrotramviaria said it was not possible to say how many people had been on board the two trains involved in Tuesday's crash, as many passengers had season tickets.

The last major rail disaster in Italy was in 2009, when a freight train carrying liquid petroleum gas derailed and exploded, killing 29 people at the station in the town of Viareggio.