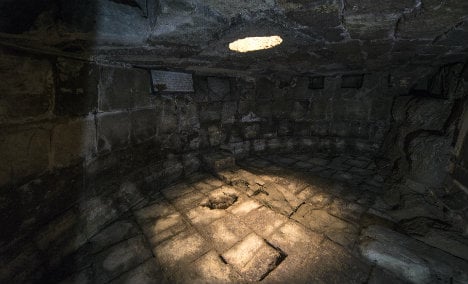 The jail is the oldest known prison in Rome. Photo:Riccardo Auci

The 3,000-year-old Carcer Tullianum is located under a 16th-century church overlooking the Roman Forum, but has been closed to the public for over a year so that archaeologists could learn more about the site and install a new multimedia itinerary for visitors.

“The reopening of the Carcer Tullianum is an important moment for the cultural life of the city,” said Rome's archaeological superintendent, Francesco Prosperetti.

“The new itinerary will help tell its extraordinary story, which is in many ways the story of the city,” he added.

Newly installed technology will now give visitors the chance to explore the site using tablet computers, by holding the screen over landmarks inside the ancient prison to bring up more information and 3D reconstructions of how it all once looked.

During its heyday, the prison was home to some very famous inmates, not least Saints Peter and Paul, who Christians believe were crucified in Rome by Emperor Nero in the first century AD for preaching the gospel to pagan Roman citizens.

“They say that Saint Peter performed a miracle while locked up here, when he made a freshwater spring appear which he used to baptize inmates. The spring can still be seen today,” said Monsignor Liberio Andreatta, the vice-president of Rome's pilgrim's association.

As well as allegedly housing pious inmates, the prison saw a slew historical figures in shackles, including Vercingetorix, the legendary leader of the Gauls who was eventually captured, imprisoned and executed by Julius Ceaser.

For his brave stance against the imperial might of Ancient Rome, Vercengestorix has subsequently been immortalized in the popular French comic, Asterix.

But the history of the prison goes far beyond famous inmates.

During recent digs, archaeologists unearthed a lemon which had been ritualistically buried in the first century BC – making it the earliest example of a lemon ever found in Europe.

Citrus cultivation did not become widespread in Italy until the middle of the 15th century, after Christopher Columbus brought back a collection of the sour fruits from an Asian voyage.

Inside the jail, archaeologists also found evidence that a structure had existed on the site for some 3,000 years, after they turned up the foundations a ninth century BC wall and two ancient burials. All of which can now be explored in detail at the swipe of a thumb.