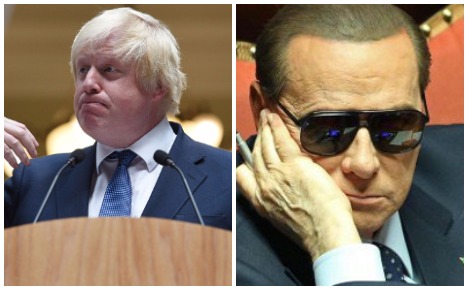 It wasn't just the Brits – Italy used to be the country in Europe that made everyone else cringe. Crazy politicians changing roles every five minutes, fist fights in parliament and a wildly fluctuating currency. In Britain, meanwhile, politics was rational and the currency was stable.

But Italy has been working hard to raise its game – while now the rest of the world is wondering what the Brits are putting in their water.

How Italian politics is now grown-up…

1- Parliament has ditched the fisticuffs (hopefully)

For a start, there hasn’t been a good fist-fight for over two years. A few weeks before Matteo Renzi, who brought a modicum of tranquillity to Italian politics, became leader in February 2014, MPs in the lower house of parliament started brawling after house speaker, Laura Boldrini, dared to cut short a long-winded speech by a politician from the insurgent Five Star Movement.

Boldrini was the first house speaker in history to use the ‘guillotine’ to cut short a debate.

2- There is no more Silvio Berlusconi (probably) True, we can never say never when it comes to Italy’s four-time premier, Silvio Berlusconi, who still appears determined to play a prominent role in politics even though he almost died of a heart attack in June.

But aside from making the odd headline now and then, the once-untouchable 79-year-old’s popularity is waning.

With his egoistic, racist, sexist and homophobic gaffes, the Benito Mussolini-admiring Berlusconi embarrassed Italy for almost two decades, shattering the country’s reputation with his antics and string of criminal convictions.

3 – Italy has restored its credibility (basically)

Post-Berlusconi, the diplomatic, outward-looking Renzi has managed to boost Italy’s credibility, even winning-over German Chancellor Angela Merkel with his charm. He inherited the leadership at a time when the country was plagued with problems, and amid the longest recession since the Second World War.

But the reform-minded 41-year-old has injected some vigour into the Italian government, making it his mission to revamp the country’s sclerotic economy and political system.

It’s still a challenge, but things have been slowly improving. He also overcame staunch opposition to finally get the civil unions bill passed in May.

Renzi’s efforts to reboot Italy have included surrounding himself with the right kind of people. Along with the respected Pier Carlo Padoan as economy minister, his foreign minister Paolo Gentiloni has been described as one of Europe’s “great statesmen”.

The seemingly calm Gentiloni has been at the centre of diplomatic efforts to resolve crises in both Syria and Libya, all the while trying to stop tensions between Europe, the US and Russia from escalating. Eight women also make up Renzi’s 16-strong cabinet.

It’s been a strange few weeks in UK politics, with British politicians, instead of Italian ones, now making their bewildered European counterparts cringe.

During the campaign to leave the EU, TV audiences were told that voters “have had enough of experts,” while a highly emotional Leave campaign carried the day.

As if the decision to leave the EU wasn’t shocking enough, both the government and the main opposition Labour Party have since descended into chaos.

The British economy also looks likely to take a hit. The financial services industry is seen as particularly vulnerable and Italy – which has suffered years of slow growth – is hoping some business might move from the instability of London to the safety of Milan. Bonus: the coffee is better too.

2 – The government has disintegrated mid-term There might not have been any punch-ups yet, but almost every day something embarrassing crops up in a country once admired for its sensible politics.

And no amount of “keep calm and carry on” motivational talk can calm the choppy waters.

There’s been all sorts of infighting and back-stabbing. Those who campaigned to leave the EU have jumped ship, the government has disintegrated and  Labour is splitting at the seams.

Theresa May became prime minister on Wednesday and with her talk of “unifying” a severely divided country, it looked like Britain might be returning to normal. Boris Johnson, the man who campaigned for the UK to leave the EU before pulling out of the race to become prime minister, is now foreign secretary.

A strange choice by May, especially given that just a few days earlier she said his negotiating skills “leave a little to be desired”.

The world reacted to Johnson’s appointment in a similar way it reacted to Brexit – with dismay and bewilderment.

“Everyone in the European Parliament thinks it's a bad joke and that the Brits have lost it,” an EU source told the BBC.

In a radio interview, French Foreign Minister Jean-Marc Ayrault said Johnson was a liar with “his back against the wall”.

Johnson, who will now travel the world representing the UK at an international level, is eerily similar to Berlusconi.

In fact, a few days after the UK voted to leave the EU, Conservative party MP Sir Alan Johnson likened Johnson to Berlusconi, asking former premier David Cameron his views on ‘Silvio Borisconi’ during questions in the House of Commons.

Indeed, Johnson also has a long record of gaffes and scandals behind him, and has in the past been less than diplomatic about other countries and their leaders.

During his ‘Leave’ campaign, he compared the goals of the EU to those of Adolf Hitler. He was also accused of being racist after saying the “part-Kenyan” US President Barrack Obama, who backed the UK staying in the EU, was biased against Britain because of an “ancestral dislike of the British empire”.

The former London mayor's other gaffes include referring to black people as “piccaninnies” during a debate in 2008 and saying that black people had lower IQ. He also once suggested that same-sex marriage “could lead to three men and a dog getting married”.

Like Berlusconi, his colourful private life has been scrutinized on numerous occasions.

But could Italy soon lose the right to claim the UK is crazier?

Alas, things can change fast. Boris Johnson notwithstanding, Theresa May now has a chance to bring some stability to Britain. Meanwhile, Italy has its own referendum in the autumn, which some people speculate could be an even bigger threat to the EU if it doesn’t go Renzi’s way.

Will the second half of 2016 see the old order restored?