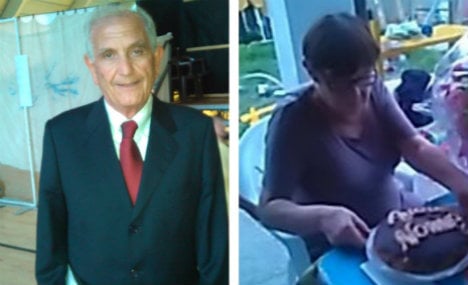 Angelo D’Agostino, 71, and his wife Gianna Muset, 68, have not been heard from since 9.55pm on Thursday. Photo: Roberta Capelli/Twitter

It is not yet known if any Italian citizens are among the dead or injured, but appeals are being made via social media to help find a missing Italian couple.

“We're calmly working to try and get in touch with them. It's likely that many people lost their phones during the attack and weren't able to get home and spent the night outdoors.”

Angelo D’Agostino, 71, and his wife Gianna Muset, 68, have not been heard from since 9.55pm on Thursday, around half an hour before a truck smashed into a crowd along Nice's Promenade des Anglais as people celebrated Bastille Day.

D'Agostino's daughter-in-law tweeted photos of the couple saying the family 'was desperate' for news of the pair.

Meanwhile, an Italian from the Ligurian town of Imperia has also spoken of his dramatic escape.

Marco Antei was attending Bastille Day celebrations in the city like many other Italians from his region who make the short journey across the border each year to join in the July 14th festivities. Antei had travelled from Imperia, an Italian town close to the French border. Photo: Google Maps

Alongside hundreds of others, Antei was enjoying the fireworks along the city's waterfront, the Promenade des Anglais when the attacker, identified as a Franco-Tunisian with dual nationality, ploughed the truck into the crowd at 80kmph.

“I was about 200 metres from it with two friends” he told La Repubblica.

“We saw people start to run away and heard people screaming, saying they could hear gunshots,” added Antei, who is president of the Ligurian branch of the LGBT rights group, Arcigay.

“I ran to hide in a nearby restaurant and sent a quick message to my husband, who I was supposed to be meeting in a central bar later on, telling him to go home.

“Then I locked myself in the cellar,” Antei added.

There are some 30,000 Italian nationals resident in Nice, according to census figures.

“Given its scale, we can't rule out the possibility that Italian nationals were caught up in the attack,” Italy's Foreign Ministry said in a statement on Friday morning.

Liguria President Giovanni Toti said hospitals near the border had been offered for use to the French authorities to help them deal with casualties.