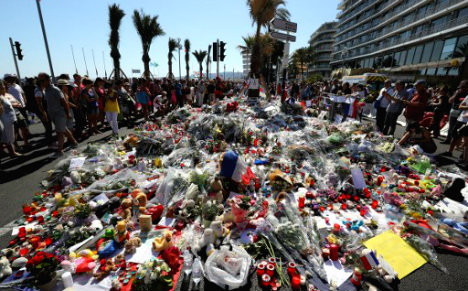 Milanese pensioners Maria Grazia Ascoli, 77, and Mario Casati, 90, are both missing following the attack, as are Angelo D'Agostino, 71, his wife Gianna Muset, 68, and Carla Gaveglio, 48.

During the attack, a gun-toting man identified as 31-year-old Mohamed Lahouaiej Bouhlel, drove a 16-tonne refrigerated lorry into crowds celebrating Bastille Day on the city's waterfront, the Promenade des Anglais.

A relative of D'Agostino made desperate appeals to find the couple on Twitter in the wake of the attack, but the pair have not been seen or heard from since just before 10pm on Thursday night – some 30 minutes before the attack began.

Ascoli and Casati have also not been seen since they went to join in Thursday evening's waterfront celebrations.

A witness claims to have seen Gaveglio, from Cuneo in Piedmont, being put into an ambulance following the incident, but Gaveglio has not been seen or heard from since.

Speaking to the press on Sunday, Italy's Consulate General to Nice, Serena Lippi, said that more time would be needed to establish what has happened to the missing Italians.

“The list of people we need to trace or find is diminishing hour by hour,” she was quoted as saying by Il Sole 24 Ore.

“It's taking the French authorities a long time to identify people, but we can't complain about it,” she added.

“Many of the bodies sustained extreme injuries in the attack, which makes identification difficult without DNA tests.”

On Friday, a medical worker told one Italian news agency that there was “at least one Italian” among the dead, however there has been no official confirmation as yet.

While three Italians remain missing, many others were found over the weekend.

Elena Gallamini was eventually found with her boyfriend, Marco Billi. The pair had been travelling in the south of France and were not in Nice on the evening of the attack.

Also found were Andrea Avagnina, 53, and his partner Marinella Ravotti, 55, both from San Michele di Mondovì, Piedmont. The couple were reported missing but later found together at the city's Pasteur hospital.

Avagnina remains in a critical condition having sustained severe head injuries during the attack.

Piedmont pensioner Geatano Moscato, 71, also suffered severe injuries as he attempted to get his 18 and 13-year-old grandchildren out of the way of the oncoming truck.

Given the extent of his injuries, medics amputated his left leg on Friday.