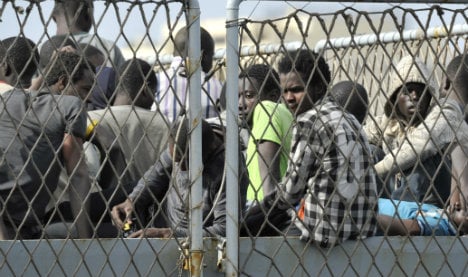 Rome bowed to pressure from the EU at the end of last year and implemented a rigorous system to identify all arrivals on its shores in exchange for a deal which should have seen thousands of refugees relocated across Europe.

But with many countries dragging their feet, Italy has found itself with growing numbers of migrants registered and blocked.

Some 135,000 people who have requested asylum are still waiting in Italian reception facilities to learn whether they will be allowed to stay and given the papers to travel, or will be earmarked for expulsion.

Frustrated by months of delays, some make their way to border crossings. Tighter security controls have made it harder to cross illegally into France, Switzerland and Austria, so many migrants set up camp while they wait for the opportunity.

The town of Ventimiglia on the Italy-France border has seen some 30,000 migrants break their journeys there since the start of 2016.

“We are doing everything to avoid a Calais-type scenario in Ventimiglia,” Mario Morcone, the interior ministry's immigration chief, said this week, referring to the camp known as “the Jungle” in France, from where migrants attempt crossings to Britain.

The latest plan is to try and spread the weight more equally across Italy, housing two or three migrants per 1,000 residents.

“We do what we can, and try to do it with dignity,” Morcone said, admitting he was “not very optimistic” about the weeks to come, as the flow of people setting out by boat for Italy from the coasts of North Africa continues unabated.

It was not clear whether the new plan would get asylum seekers off the streets. Ventimiglia mayor Enrico Ioculano has said his town, where migrants sleep under bridges or on the beach front, is “strangled by a system that does not work”.

Lake Como, best known as a playground for the rich and famous, has also had to make space for people who have set up camp in a park near the border with Switzerland as they bide their time for a chance to journey north.

Vast international media coverage of Austria's plans to build a fence along the border at Brenner seems for now to have deterred migrants from trying to cross there, Arno Kompatscher, head of the Bolzano province, told AFP.

But with every chance Brenner will make it back on the migrant route, and could soon have its own camp to deal with, Kompastcher is quick to insist “Italy cannot shoulder the weight of this phenomenon, alone, for the whole of Europe”.

Over 80,000 migrants have been plucked from rickety vessels in the Mediterranean and brought to ports across Italy this year.

There have been roughly the same number of arrivals as there were this time last year. But the situation on the ground has changed.

Italy is no longer a transit country but “a territory they cannot leave,” Morcone told a Council of Refugees (CIR) press conference.

Migrants finger-printed here have no choice but to remain. Rome has repeatedly failed to convince the EU to change its asylum rules, known as the Dublin Regulation, which stipulate that asylum seekers must apply in their country of arrival.

And the EU's relocation programme, adopted in September to much fanfare, “has clearly failed”, Morcone said.

Data from the European Commission this week showed that of the 39,600 asylum seekers earmarked for relocation from Italy to other European countries, only 877 have been moved so far.

Meanwhile, the arrivals in Italy continue: more than 3,700 people were picked up this week, with nearly 40 bodies recovered at sea.