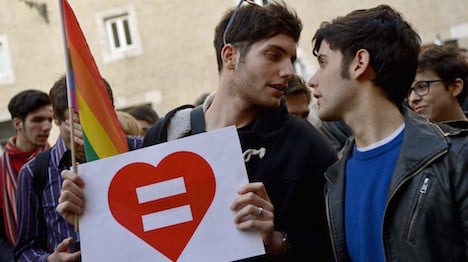 Italy became the last major country in Europe to recognize same-sex civil unions in May, when a historic yet controversial bill was passed after a years-long battle.

Two months on and the long wait for many couples is finally over, as lawmakers have have finished creating the necessary bureaucratic and legislative infrastructure to enable mayors to start carrying out same-sex unions for the very first time.

“Starting from Friday, mayors across the country will be taking bookings from couples who want to have a civil union,” announced the bill's champion, Democratic Party politician Monica Cirinnà.

“From the Ferragosto holiday in mid-August [15th] the first ceremonies will be carried out and there will be rainbow-coloured confetti for everybody,” she added.

There was more good news for LGBT couples too, as lawmakers said they would make it impossible for mayors opposed to civil unions to refuse to carry out the ceremonies.

In the wake of the bill's passage, many local leaders from Italy's Catholic-right promised they would refuse to perform civil unions in an act of conscientious objection.

But lawmakers promised the legislation has been set up to block would-be objectors.

“Civil unions are an absolute right for citizens and if mayors object, legislation allows anybody holding a different civic office to carry out the ceremonies,” said Franco Frattini, the president of Italy's Council of State.