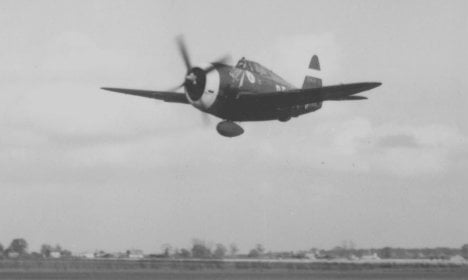 The plane, an American P-47 Thunderbolt class fighter, was unearthed on Saturday in front of the dead serviceman's emotional children and grandchildren, who had travelled to Italy to be present at the dig.

The plane once belonged to U.S Air Force pilot Loren Hintz but was shot down by a Nazi anti-aircraft gun trying to protect the German Wehrmacht as they fled from towns around the Italian city of Bologna on April 21st, 1945.

Hintz was killed just eight days before the war in Italy ended, leaving behind his five-month-old daughter, Gretchen, and his wife, who was carrying his unborn son, Martin.

Gretchen and her children were present as the resting place of their relative, who they have only ever seen in black-and-white photographs, was finally located.

“I'm deeply touched by the presence of so many people – Italian friends I never knew I had,” Gretchen Hintz told Corriere during the dig.

Gretchen and other members of the Hintz family had spent the last four years trying to pinpoint the exact spot the plane fell, after coming across the name of the town 'Bagnarola di Budrio' in the US Air Force's report of Loren Hintz's final mission. The tiny town lies on the outskirts of Bologna. Photo: Google Maps.

In a bid to find the plane, the family enlisted the help of local historian Giampiero Fabbri, who conducted interviews with the few surviving residents of Bagnarola di Budrio who witnessed it fall 71 years ago.

Once Fabbri discovered where the plane lay, he had to apply to the local council to perform a dig in the area.

“We managed to get the all clear from a court in Bologna a few days ago,” he told Corriere. “It is the first time a private association has asked to perform a dig like this.”

Hintz's children and grandchildren flew over from California to be present at the excavation and looked on sombrely as the wreck of the plane was found.

Before unearthing the plane, the team excavated four vertical meters of soil, which still smelt richly of petrol after more than seven decades.

The archaeologists found an engine cylinder, the cockpit's seat, a metal name tag belonging to Hintz and one of the plane's Browning machine guns.

A video of the dig can be seen below.

Excavations will continue over the coming days in the hope more of the wreckage, or even some human remains can be found and finally put to rest.