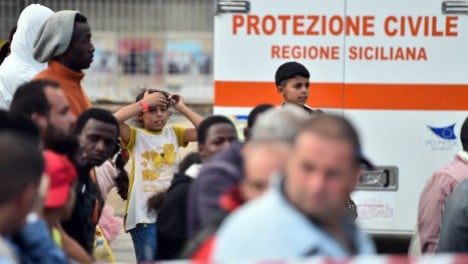 According to the report, just 2,026 of the country's 8,000 municipalities currently host migrants on humanitarian grounds, meaning the refugee burden is being unfairly shared across the country.

Huge arrival numbers and slow processing times mean there are currently 101,113 people being housed, fed and in many cases, educated, by a mere quarter of the country's local councils.

A map showing the distribution of asylum seekers as of June 20th this year can be seen below.

As its base, the map used fresh guidelines set by Italy's Interior Ministry last week, which stated that areas involved in the ministry-funded Sprar project (Protection System for Refugees and Asylum Seekers) should limit numbers to two or three migrants for every 1,000 residents, following complaints from overwhelmed local councils.

The green areas of the map represent municipalities in which the number of refugees is less than 2.5 per 1,000 citizens, the yellow areas where refugee numbers average 2.5 per 1,000, and the areas that exceed the new threshold are shown in red.

For example, Sant'Arcangelo, a town of 6250 people in the southern region of Basilicata hosts no refugees whatsoever, but Salemi, a town of 11,000 in Western Sicily, hosts 232.

According to new guidelines, Salemi therefore hosts 760 percent more asylum seekers than it's capable of supporting.

An interactive version of the map can be found here. Clicking on each municipality will bring up the precise number of asylum seekers living there.

Although new guidelines have been established, the rules only affect council's enrolled in the Interior Ministry's Sprar project, of which there are just 800. Some 1226 others are hosting migrants on a voluntary basis, which has in part contributed to the large scale un-evenness of distribution.

Earlier this month, Luca Zaia, The regional governor of Italy's northeastern Veneto province, said he was working to stop councils hosting more migrants after it emerged there were some 10,576 asylum seekers across the region.

“We are no longer prepared to let our territories suffer for the foolish policies of the Italian government and the EU,” said Zaia, who is a member of the anti-immigration Northern League party.

At the same time, the independent mayor of the Calabrian town of Brognaturo, which is home to 712 residents and 146 asylum seekers has said he would like to host even more.

“It hasn't been a problem – in fact it's a pleasure,” the town's independent mayor Giuseppe Iennarella told La Stampa.